They work anywhere from 16 to 20 hours a day, four days in a row, in the sweltering summer heat. They carry luggage up and down stairs for 2,000 incoming freshmen students and put in more than 200 hours of work over the course of three months. But the students who volunteer to be on the University of Central Arkansas Student Orientation Staff (SOS) take on these tasks and many, many more with smiles on their faces and orange t-shirts on their backs while asking for nothing in return. 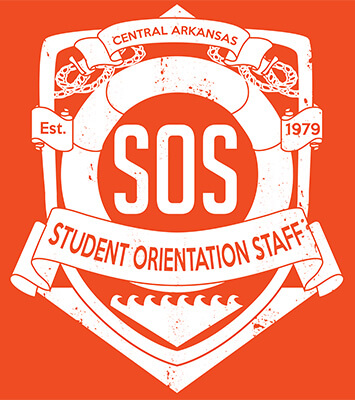 What would possess a student to volunteer for such a tough and exhausting program when they could be relaxing out in the summer sun? “They have hearts for service, plain and simple,” said Colin Stanton, director of New Student Programs. “They want to give back to the University. Somebody, somewhere on this campus, at some time, has made an impact on them, and they just want to pay it forward.”

For incoming freshmen, making the transition from high school to college is an exciting and challenging experience, and SOS makes it as easy and as fun as possible.

The SOS program began in the fall of 1979 under the leadership of Dr. Fred Rhoades, then dean of students. SOS is a staff of 80 volunteer student leaders who are responsible for facilitating all activities during Summer Orientation and Academic Registration (SOAR) and Welcome Week. The SOS Leadership Team consists of Stanton and two student co-directors. This year’s student co-directors are Hannah Kent and Joey Baker. Together, they plan, implement and oversee all orientation programming along with six additional team leaders. 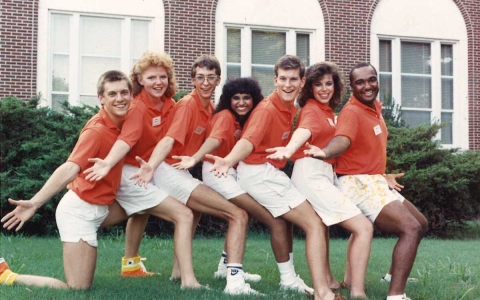 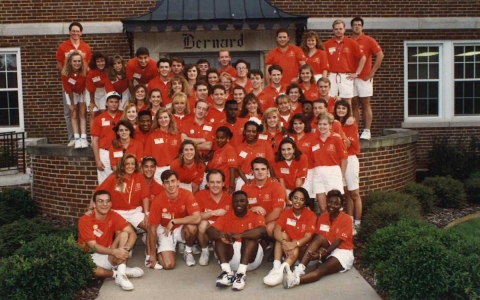 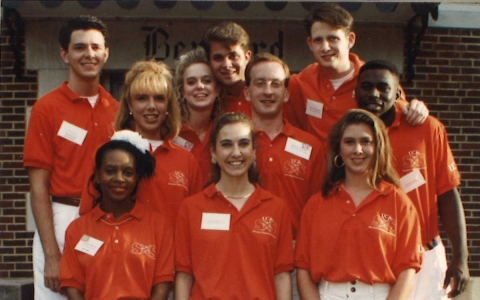 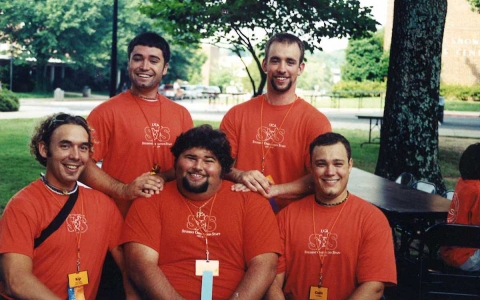 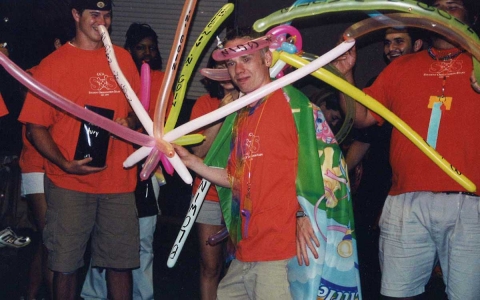 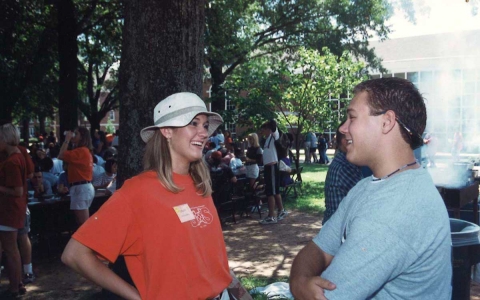 SOAR is an overnight orientation experience that is designed to introduce incoming freshmen to the University and gives them an opportunity to get acquainted with the campus, hear from faculty and staff about what to expect in their first year and have a chance to meet other incoming freshmen. During Welcome Week, which lasts from move-in day to the first day of classes, students participate in activities and programs that give them opportunities to lay a foundation for a successful collegiate experience. During each of these intensive programs, SOS volunteers can be found setting up events, standing on campus holding signs, conducting tours and unloading vehicles.

Hank Phelps, Student Center director, believes that SOS plays an important role when making a first impression on new students. “For many students, SOS volunteers are one of the first personal contacts they make at UCA,” Phelps said. “It’s important that a new student feels comfortable asking questions and requesting help. The fact that SOS kids are volunteers enhances their value, and we hear great things from a lot of parents when they learn that the SOS volunteers are doing what they do for the love of UCA and their own desire to help others.”

SOS stands out on campus as an extraordinary organization. SOS volunteers, easily recognizable in their orange shirts, always look like they’re having fun. They’re full of energy, and their smiles are contagious. It’s no wonder that Stanton averages about 220 applicants during each interview process for the 72 open positions. Students have to re-apply every year, and it’s a very competitive process. 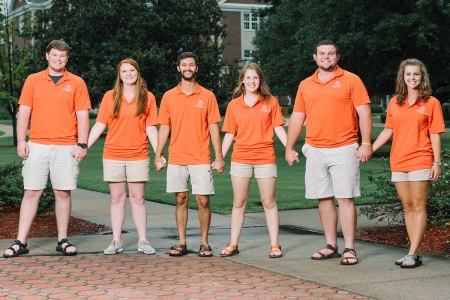 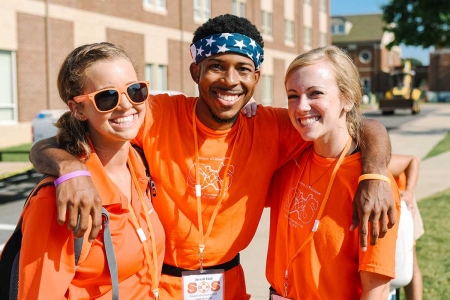 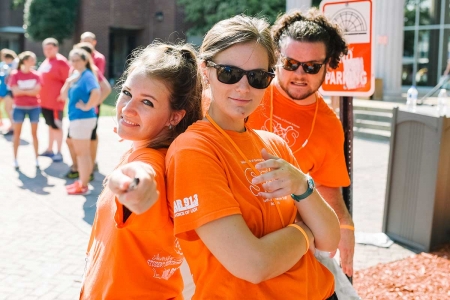 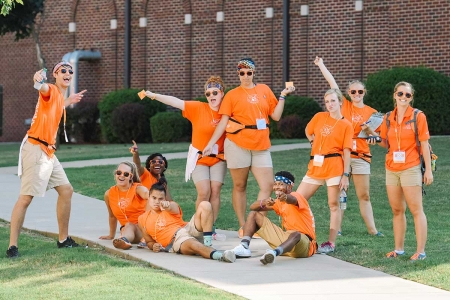 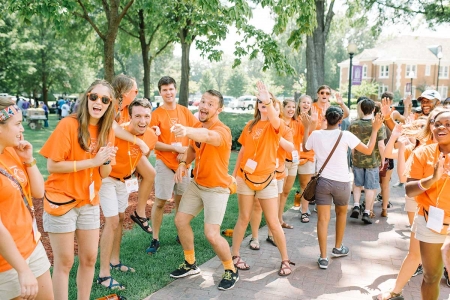 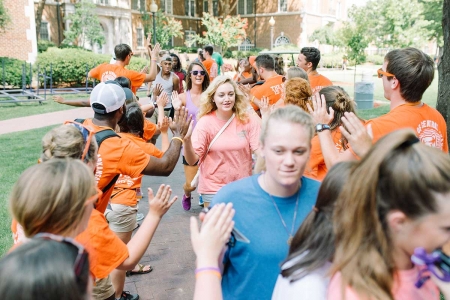 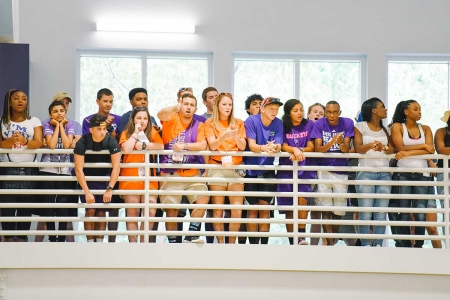 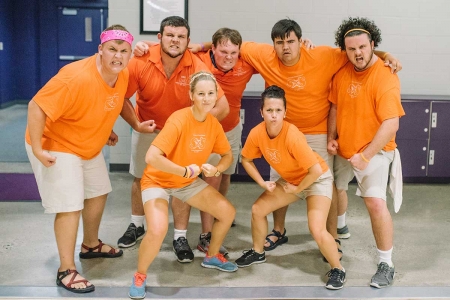 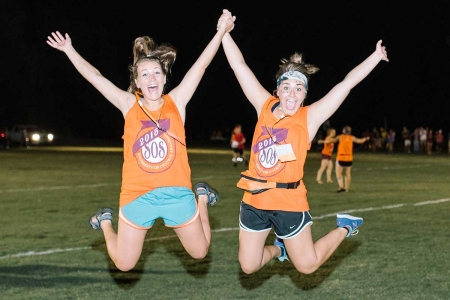 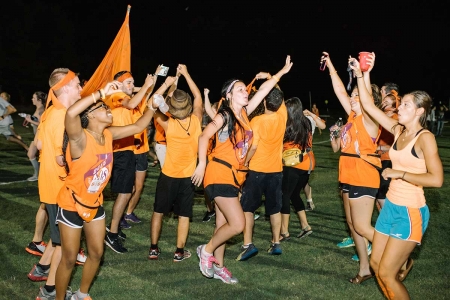 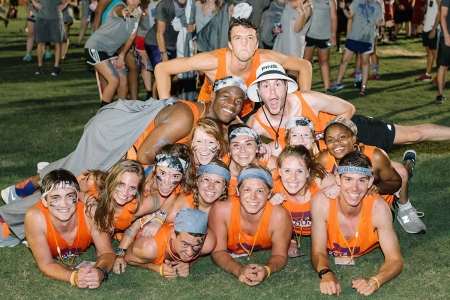 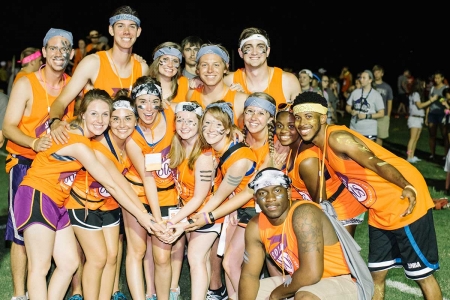 “With a student-run organization, there are usually priorities like financial gain or competition, but SOS isn’t competing with anyone or trying to make money. We are just trying to change people’s lives, you know?” said Baker. “I think students see that, and because they have never been part of an organization with such altruistic motives, that’s what really gets them pumped up to keep coming back year after year.”

Being a volunteer comes with its own special rewards. From gaining new friendships to undergoing personal growth, being a part of the SOS team is worth more than a line on a resumé. “I’ve built friendships with incoming students and other staff members that have changed my life and developed me as a person,” Kent said. “Those are the kinds of things that make the whole thing worth it when you aren’t getting any other tangible rewards. This organization is in the business of building the most insanely strong friendships and relationships I’ve ever witnessed.”

“At the end of each day, we have a debrief session with Colin,” Baker said. “When we debrief, we talk about which students really stood out and stepped up each day. It’s so rewarding to see them grow and change.”

Witnessing other students undergo personal growth and building relationships is really what service is all about. “It’s like being a coach on a team. You can give them instructions, but you can’t play the game for them,” said Baker. “When they step up and they realize things that you were realizing when you were in their position, it’s so great. It gives you the confidence that when you’re gone, someone will step up and put the same amount of effort into it that you did.”