The University of Central Arkansas, once again, toppled its previous all-time fundraising record with a total of $30,051,844 raised in 2018-19.

This marks the second time in as many years that the institution has bested its record.

“These new fundraising milestones show the tremendous support our alumni, donors and friends have for UCA,” said UCA President Houston Davis. “Their steadfast engagement will continue to transform our university and our communities for generations to come.”

The total represents a 193% increase from the 2017-18 year. During that time, the university raised more than $10 million, which set the previous all-time record.

Included in these latest figures are two events that also continue to set or break fundraising milestones, Day of Giving and Laurels & Stripes. 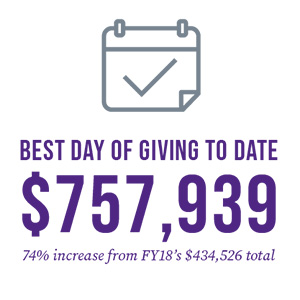 The fifth annual 24-hour Day of Giving raised $757,939, which represented a 74% increase from 2017-18 and set another record. Donors — alumni, parents, faculty, staff, students, corporate partners, friends and many others — were able to give to specific impact funds within student, campus and community impact categories.

Formerly known as Night of Distinction, the inaugural Laurels & Stripes was the “fundraising party of the year.”

The event raised $719,000 in private scholarship support, with several endowed funds announced during the evening, including the Amber and Jeffrey Hall Gallivant Grant.

Amber Hall ’07 and her husband, Jeffrey, decided to establish the fund to support students who need to travel to present research or attend professional conferences. She explained that while she and her husband received academic scholarships, in many cases, those funds rarely covered experiences outside the classroom. Students from the College of Natural Sciences and Mathematics would be eligible.

“We wanted to give students the opportunity to go and present the research they’ve done,” Amber Hall said. “We wanted to pay for students to actually have an experience out in the world.”

The UCA Foundation was also awarded the largest gift in the history of the university — a $20 million challenge gift from the Windgate Foundation in support of the arts. One portion, $1 million, will be added to the Windgate Scholarship Fund, and $19 million will support the construction of the Windgate Center for Fine and Performing Arts.

Additionally, the university added more than 1,800 new donors and experienced a 78% increase in major gifts.
“Securing 114 major gifts doesn’t happen by accident. That reflects the hard work of a dedicated team of professionals who love UCA,” said Kale Gober ’09, vice president for University Advancement and president of the UCA Foundation. “This level of giving is a testament to our incredible donors. They see the trajectory and feel the excitement under Houston Davis’ leadership, so they are investing with confidence and enthusiasm.” 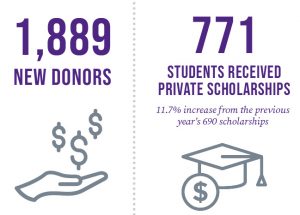 Scholarship dollars awarded increased by more than 20%, with 771 students receiving private scholarships, up from 690 the previous year.

The UCA Foundation’s net assets are $53,754,909, and the current total endowment level is $29,078,210. The foundation has 210 fully endowed scholarships and has awarded more than $12 million in scholarship support since its inception in 1981.

“I am thrilled that we continue to raise more and more private funds for university support, and specifically, for student scholarships,” Davis said. “The generosity of our donors ensures our students — many of whom are first-generation college students — have the resources they need to earn life-changing college degrees and impact economic and cultural growth in Arkansas and beyond.”