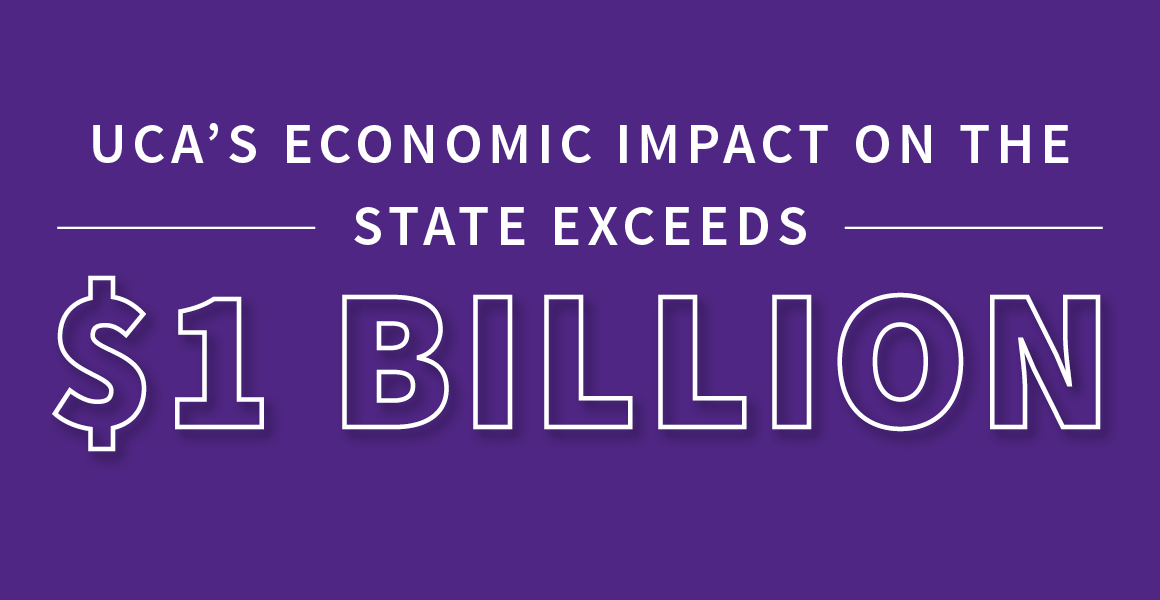 The University of Central Arkansas added $1.01 billion in income to the Arkansas economy and supported 19,506 jobs (one out of every 85) in fiscal year 2018-19, according to a recent study that measures the economic impact and return on investment of the university to its students, taxpayers and society.

The study was conducted by Emsi, an internationally renowned provider of data for higher education and business. Results were announced at the August Board of Trustees meeting.

“We have always known that UCA and our high-quality academic programs are vital to the economy, to the future earning potential and career prospects of our students and to the long-term success of Arkansas residents,” UCA President Houston Davis said. “However, it is affirming to have this new positive data as we look ahead and work with local and state leadership to ensure a prosperous and vibrant future for our students, campus community and the state.”

The report demonstrates the significant impact UCA students make on the state during college and after graduation, as well as their overall return on investment to obtain a college degree.

“This study reaffirms what we have known all along — that UCA is a major economic player in the state,” Arkansas Secretary of Commerce Mike Preston said. “Not only is the university one of the largest employers in Faulkner County, but these are jobs that pay higher than average wages. And in turn, research continually shows that college graduates will go on to earn higher wages, and we certainly hope these students stay in Arkansas and contribute to the economy.

But we also have to consider the indirect impact, which is sometimes forgotten. Everything from construction to students dining out to cutting-edge research brings in dollars that impact our state’s bottom line and improve the lives of all Arkansans.”

Since 1907, students have studied at UCA and entered the workforce with greater knowledge and skills. Today, thousands of UCA graduates are employed in Arkansas. These skilled alumni receive higher earnings and increase the productivity of their employers. During the analysis year of this study, UCA alumni generated $878.4 million in added income for the state economy, which is equivalent to supporting 16,920 jobs.

“That’s one of the payoffs in higher education is the fact that people come out with more capacity that has value in whatever work setting, industry or career field,” said Randy Zook, president and chief executive officer of the Arkansas State Chamber of Commerce and the Associated Industries of Arkansas. “The study reinforced, clearly, the importance of higher education in the overall economy of Arkansas. It’s a significant impact of one institution that is helping people to become more valuable in the economy.”

In return for their investment, the average UCA baccalaureate degree graduate will earn $31,100 per year more than an individual with a high school diploma or equivalent working in Arkansas. This amounts to $1.4 million in higher earnings per graduate over the course of their working lives. Put in another way, for every dollar UCA students invest in their education, they will see a return of $5.20 in higher future earnings. This is an average annual return of 19.1%, significant because interest earned on most savings accounts is less than 1%.

From a taxpayer perspective, the study indicates that UCA generates more in tax revenue than it takes. Benefits to taxpayers take two forms: taxes that the state and local government collect from the added revenue created in the state, and savings generated by the improved lifestyles of UCA students and the corresponding reduced government services. For every dollar spent by taxpayers, they receive $2.20 in added tax revenues and public sector savings over the course of the students’ working lives.

Altogether, the social benefits of UCA equal a present value of $2.7 billion. These benefits include $2.5 billion in added income through students’ increased lifetime earnings and increased business output, as well as $191.5 million in social savings related to health, crime and income assistance in Arkansas. In other words, for every dollar invested in UCA, Arkansans will receive a cumulative value of $8.60 in benefits. The benefits of this investment will occur for as long as UCA’s FY 2018-19 students remain employed in the state workforce. 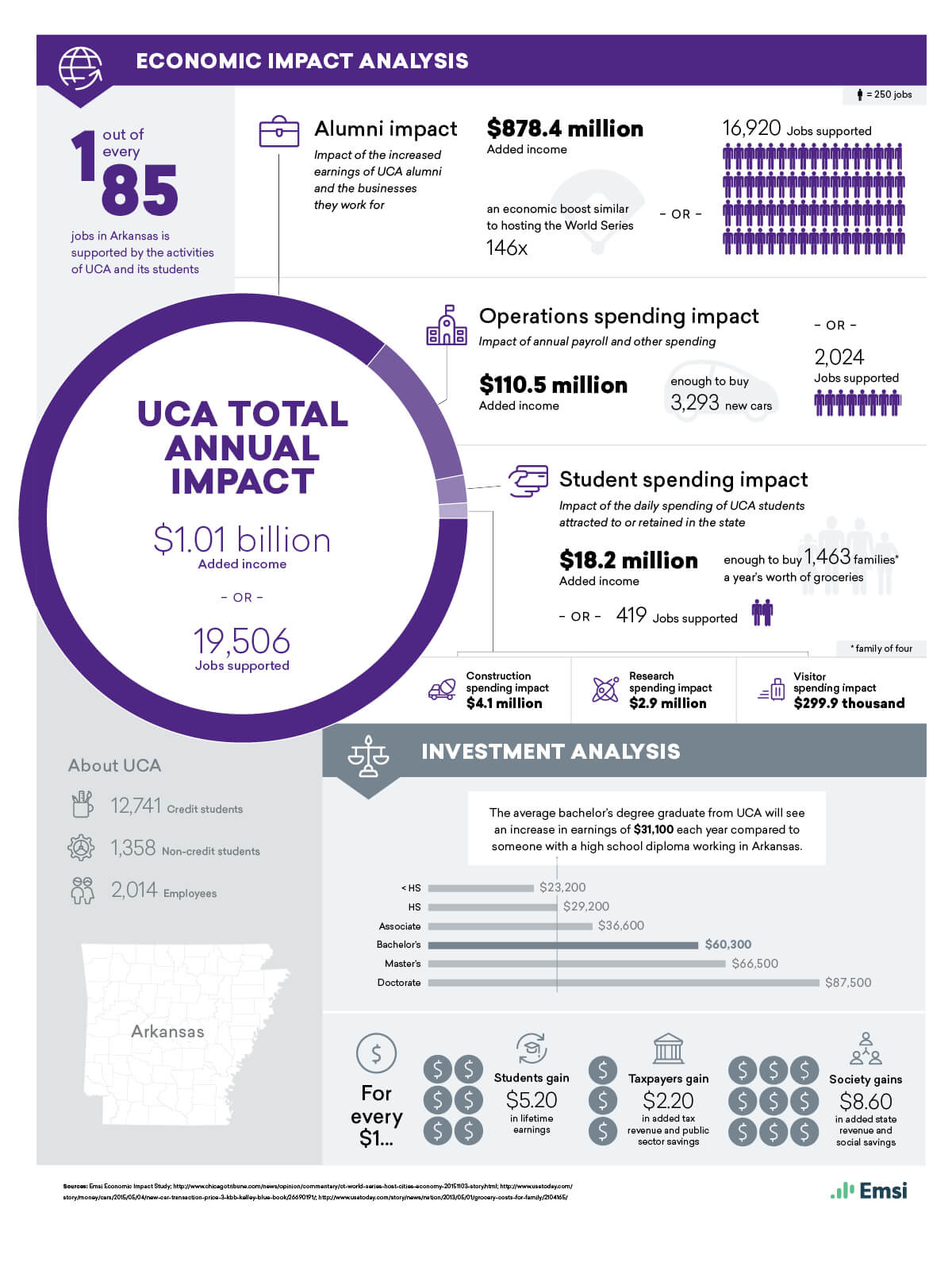 Data and assumptions used in the study are based on several sources, including the FY 2018-19 academic and financial reports from UCA, the university’s alumni records matched to Emsi’s Alumni Outcomes database, industry and employment data from the U.S. Bureau of Labor Statistics and U.S. Census Bureau, outputs of Emsi’s Multi-Regional Social Accounting Matrix model, and a variety of studies and surveys relating education to social behavior. The study applies a conservative methodology and follows standard practice using only the most recognized indicators of economic impact and investment effectiveness. For a full description of the data and approach used in the study, visit uca.edu/economicimpact.