Kelley Erstine is no stranger to UCA. Since the mid-1970’s, Erstine has been an ever-present source of loyalty and support for UCA. “As a student, as an employee, as an alum, as a trustee, and now back as a staff member of the university, I have a deep sense of loyalty to this university,” stated Erstine, “I was the first one of my family to actually graduate from college and I think a lot about who I am as an individual is attributed to my years here, especially as an undergraduate at UCA.” 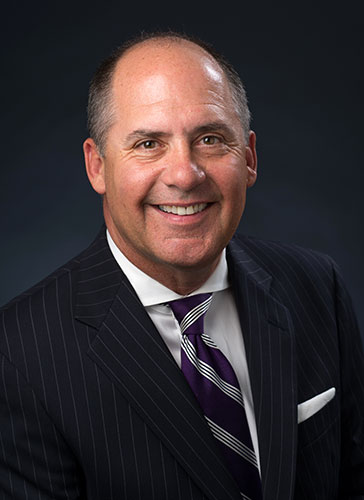 Erstine graduated from UCA in 1979 with a degree in journalism. A native of Sheridan, Ark., he previously has served as a member and chair of the Board of Trustees, as well as vice president for Institutional Advancement. Since July 2008, Erstine had served as the chief executive officer of the Independent Insurance Agents of North Carolina, a state trade association representing approximately 1,000 independent insurance agencies. In September, he returned to UCA as chief of staff. When asked if he noticed any major changes on campus, Erstine said, “To me what seems to be the biggest difference is that everyone is engaged, all parties, whether it be staff, faculty, students, administration, everyone seems to be more of a collaborative nature.”

As chief of staff, Erstine works under the direction of UCA President Tom Courtway. He sees his greatest responsibility as amplifying the goals set forth by the Framework for the Future, the visionary plan created by Courtway. “I think all of the different entities of the university should be focused on this. My goal will be to adhere to that task,” Erstine said.

“I love UCA,” Erstine said with a smile, “It’s a little surreal to be back. Honestly, it is surreal, but it is the right time and I’m honored to be back.”