Greek Village construction, expansion and renovation of other facilities

Excitement is building at the University of Central Arkansas as the walls go up on the long-awaited Greek Village.

“People are really getting excited because they can see it,” said Lindsey Osborne, sorority life director.

University administration has talked about building a Greek Village for years, but those talks turned into action when the UCA Board of Trustees approved a $13.8 million bond to finance the project earlier this year. Construction started in April.

The Greek system has been at the university about 100 years, and now has 24 Greek fraternities and sororities. The first phase of Greek Village is set to open in fall 2015. This means new homes for five sororities, each with about 10,000 square feet and 32 beds, located at the intersection of College and Donaghey avenues. Greek Village will create a community space for Greek organizations with four meeting rooms for the university’s National Pan-Hellenic Council sororities. Eventually, fraternity homes will be added and more meeting areas will be added to the Community Center. Long-term plans include space for offices and a food vendor. Osborne said students are already thinking of the grand opening.

The Greek Village is one of about 40 construction and renovation projects happening at UCA according to Larry Lawrence, Physical Plant director. A newly extended Health Physical Education and Recreation Center is set to open in November. The $12.6 million project will add 43,227 square feet with about 30 parking spaces. Lawrence said another parking lot on the east side of the building allows people to park, walk up the sidewalk and cross a new bridge. 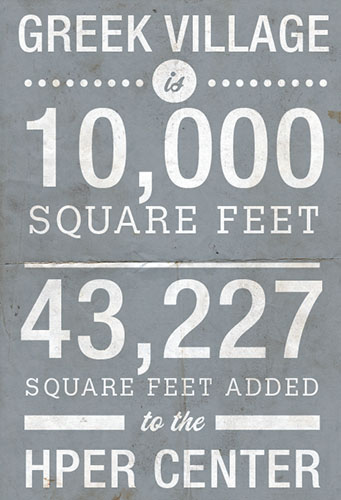 The additions to the center include an overhead door where people can check out canoes and bicycles and other equipment. The existing 28,000 square feet will also be renovated. Those projects include refinishing basketball court floors and adding expansive windows to the walking track.Other projects at the university include improving 59 apartments at Stadium Park, putting in better drainage and landscaping along Bruce Street and building restrooms for the student recreational field. Conway and Carmichael halls just received new roofs this past June. UCA also hired a contractor to polish concrete floors in the Christian Cafeteria as well as some apartments. More improvements are in the works for the Farris Center and Doyne Health Science, Lawrence said. Irby Hall will get new office spaces and a math lab. Gravel parking lots are being added on Western Avenue and South Boulevard.