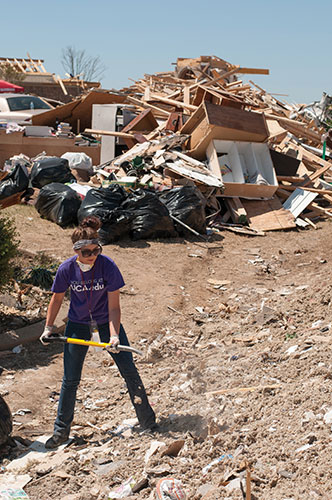 Residents passed those words by text, telephone or just by shouts and screams for friends, foes, colleagues, relatives, and neighbors who began emerging from storm shelters, closets, basements, or wherever they had found shelter. An EF4 tornado had hit Faulkner County.

Almost immediately, the news that the UCA campus had not been damaged began to spread. Other communities in and around Faulkner County had a different story.

Bryce Crabb, vice president of operations for the Student Government Association, was overwhelmed when he first saw the damage. “It’s as if one day there was life and happiness, and everything was going great, and then someone took a large eraser and just went through and took stuff out. There are pieces of trailers hanging in trees and dirt everywhere with debris all over the place. It’s pretty incredible, the damage that has happened. It’s pretty inexplicable, unless you are out here, but a warzone is pretty close to what it looks like.”

Hundreds of homes, businesses, churches, and other buildings were damaged or destroyed, leaving only concrete slabs in some cases. Dozens of individuals were treated at area hospitals for minor and major injuries. Sadly, the tornado claimed the lives of 11 residents and an infant whose mother sustained serious injury as a result of the tornado, as reported by the Faulkner County Coroner’s office. 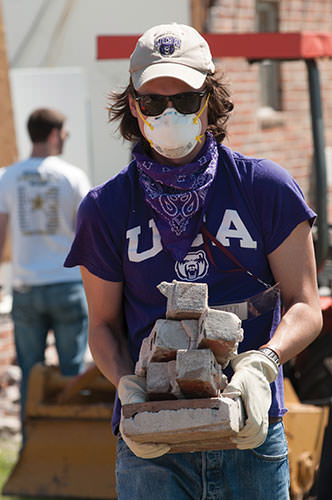 The UCA family wanted to help immediately. “So we did three things. We put a committee together, and the committee came up with a fundraising campaign to raise money for the victims. Secondly, provide goods, such as food items, water bottles, and things like that for the victims. The other thing we came up with was a volunteer effort, an all week-long volunteer effort, Bear Boots on the Ground,” said Gary Roberts, dean of students.

Bear Boots on the Ground started Monday, May 5. Faculty, staff, and students were transported to and from work sites throughout Faulkner County. Volunteers could work a morning or afternoon shift or both.

“You don’t realize what nature can do until you get into the middle of something like this, and you just think about this poor person who lives in this house. Everything is gone. You know. It’s devastating,” said Dr. Nancy Reese, chair of the UCA Department of Physical Therapy, who volunteered during the effort. 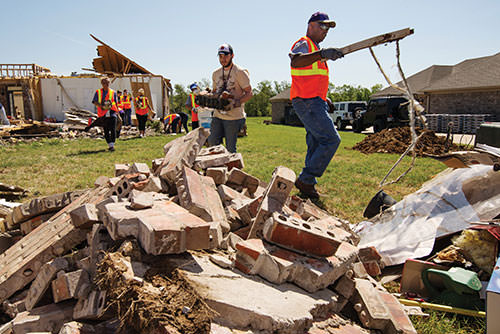 “It’s just where we need to be,” Tammy Benson, associate professor and chair of the Master of Arts in Teaching program at UCA, said during one of her visits to the relief sites. “We are lucky and blessed that we could come help. These people have dealt with a lot, so it’s the least that we can do.”

The students who gave their time appreciated the university going to such lengths to help the community. “We’re not a large university with a bunch of faculty that doesn’t care. We have faculty that is serving shoulder to shoulder with us out here, shoveling and picking up cinder blocks. That’s what we do. We serve. We love. UCA is a family and seeing this is the reality of that coming to light,” Crabb said. 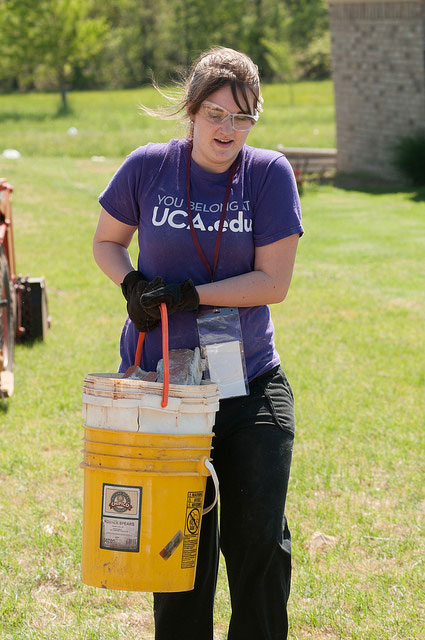 The campus also collected canned goods, toiletries, and other supplies at several locations that were all donated.
“So we do what we can. We reach out. We do whatever we can do to help and show our compassion to those that are affected. Our thoughts and prayers are still with them, and they are going to be as we move ahead,” said UCA President Tom Courtway.

Even before Bear Boots on the Ground began, individual students, faculty, staff, students, and groups reported to work in the disaster areas. Officers with the UCA Police Department showed up within hours of the tornado to help patrol and set up checkpoints in Vilonia and Mayflower. They volunteered 300 hours of their time to tornado victims. UCA athletes also were some of the first to come together within hours of the disaster to assist in cleanup and relief efforts.

The UCA Foundation, Inc. established a Disaster Assistance Fund for UCA faculty, staff, and students impacted by the tornado, raising over $14,000 in aid.

Crabb summed up UCA’s efforts this way:
“I mean when people ask me, ‘Why do you like UCA so much? There are bigger universities in Arkansas,’ and this and that. This is it. We are a community. We are a family.”