University of Central Arkansas student-athletes began utilizing the brand new Michael and Maria Norvell Nutrition Center in the fall of 2016 and are already reaping the benefits. 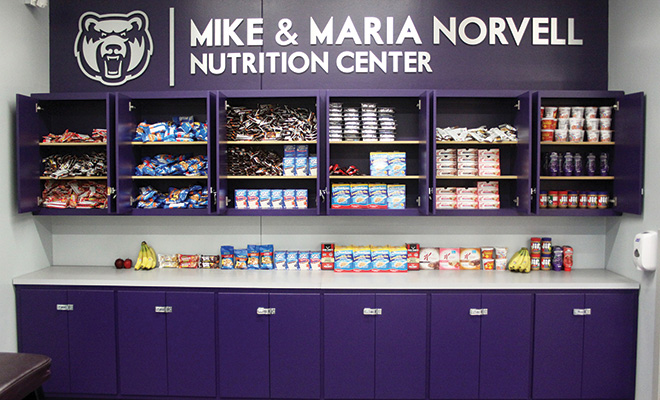 Michael Norvell ’07, the current head football coach at the University of Memphis, is a former record-setting wide receiver at UCA in the early 2000s. He and his wife, Maria ’03, are both graduates of UCA and made a significant contribution to the UCA Purple Circle that funded the program’s first-ever nutrition center.

“Mike Norvell knows what being a student-athlete is all about,” said Dr. Brad Teague, UCA’s director of athletics. “He recognizes the challenges we face in Division I FCS. We appreciate Mike and Maria Norvell for their significant contribution to our program and for providing a very important resource for the health and well-being of our student-athletes. Coach Norvell is proud of his experience at UCA and has given back in a significant way. We thank Mike and Maria for their support.”

Norvell, a former walk-on receiver who was inducted into the UCA Sports Hall of Fame in August 2016, is the school record holder for career receptions (213) and is fifth in career receiving yards (2,611). He played on teams that won 33 games in his four seasons, including UCA’s best team in the NCAA Division II era. The 2005 Bears finished 11-3 and lost in the Division II quarterfinals.

Norvell served as an assistant coach at UCA, Tulsa, Pittsburgh and Arizona State before taking the reins at Memphis in 2016. He led the Tigers to an 8-5 overall record and a spot in the Boca Raton Bowl this season.

“Maria and I are honored to be able to support the UCA Athletic Program,” said Norvell. “UCA was a wonderful place for the both of us, and we are grateful we have the opportunity to give back. As a student-athlete, there are already many challenges and demands, especially in getting good nutrition for competition and for recovery, so we choose to support UCA with a gift to the nutrition center. This gift will help support those student-athletes in an area that is critical to their health and success.”

The center features healthy meals, snacks and drinks available to UCA’s 400 student-athletes from all 18 varsity teams. The center is located in UCA’s state-of-the-art weight training facility adjacent to the indoor practice center and is under the supervision of UCA strength and conditioning director Alex Fotioo ’10, ’12 and his staff. Fotioo graduated from UCA with a bachelor’s degree in exercise science in 2010 and a Master of Science in exercise physiology in 2012.