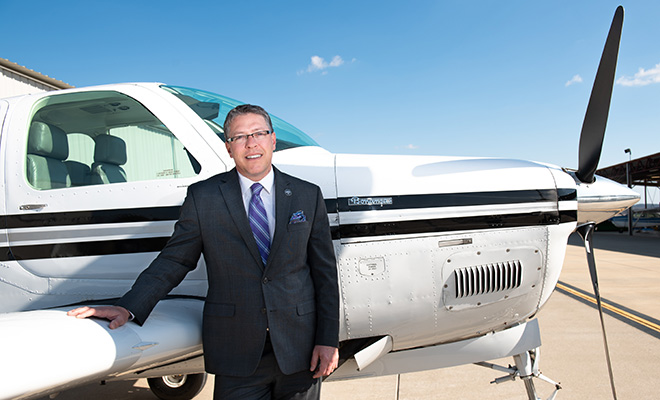 When he isn’t serving the University of Central Arkansas as athletic director, Teague can often be found piloting the skies on his way to regional hotspots like Dallas, Houston, New Orleans and even Orlando.

“Just being able to depart and arrive somewhere else in a short amount of time is really invigorating,” Teague said. “And then sightseeing. I like to get up and just fly around and see the different sights, especially [seeing how pretty] Arkansas is. You can see a lot of different lakes and mountain ranges really quickly right here from Conway.”

It’s no wonder Teague has picked up such a hobby–it’s in his blood, he said. His father and grandfather ran the Brookhaven, Mississippi, airport, and his uncles flew, too. When he took the role of athletic director at Delta State University in 2004, he decided to also take advantage of the aviation program at the Cleveland, Mississippi, school.

While there, he earned his private pilot license by completing 40 hours of training and later his commercial license and instrument rating. But that doesn’t mean he’s off to fly commercial airplanes. With his credentials, Teague can be hired to fly a single-engine plane in both cloudy and clear skies. He now has about 1,100 hours of experience under his belt.

“What I love about it is it’s aviation–it’s flying–but it’s also communicating, communicating with air traffic control. And then it’s navigating. You’ve got to know where you’re going and understand all the maps and different things,” he said. “I was a math major in college, so there’s a lot of calculations. I love maps and have always studied maps. So this really kind of hits everything that I like to do.”

His out-of-state trips are typically under two hours one way, and at most about four, and are done using his current favorite: the 1988 Beechcraft Bonanza that’s housed among other single-engine planes at the Conway Municipal Airport.

“This is one of the fastest single-engine, nonturbine airplanes, so it’s been a lot of fun to fly,” he said. “It has retractable gear, so once you take off, the gear folds up inside the plane, whereas [others] do not, so they’re slow. That contributes to the lack of speed because there’s a lot of drag being pulled along in the air with those.”

Despite what some may think, Teague said, flying is pretty easy; most challenges arise when landing a plane.

“A lot of your training is to mitigate emergencies or mitigate risks, so understanding what do you do in an emergency, and certainly, I hope I never have one,” he said.

Next on the list of Teague’s piloting goals is to earn his multiengine rating so that he can fly an aircraft that’s able to carry more weight and move faster.

“The fact that you can leave Conway, Arkansas, and be somewhere a long way away in a couple of hours is really, really interesting and really fun,” he said.