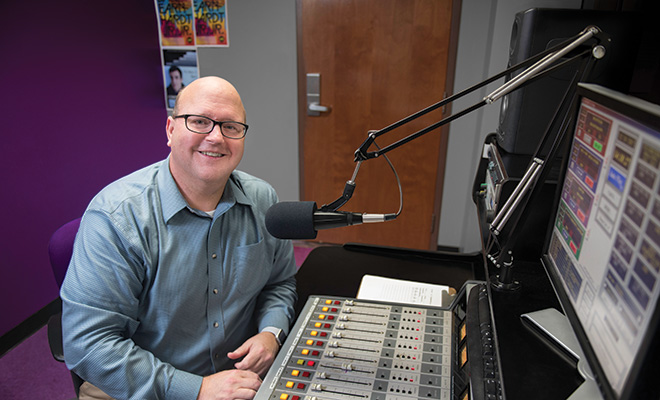 “Imagine being in high school and your high school teacher is on the radio,” said Bunn, a 1988 University of Central Arkansas graduate, with a dry chuckle. “I certainly used that to my advantage, upping the coolness factor a little bit.”

While a math teacher at Rose City Middle School and North Little Rock High School, Bunn piloted the airwaves at Magic 105 in Little Rock, a job he kept for about 20 years until the radio station shut down. That gig followed four years with KUCA during his undergrad years at UCA, and before that, he played the hits for school dances in his hometown of Crossett.

“After home football games, we would have dances. I was the DJ, and I had all these records,” he said. “During my freshman year at UCA, I saw an ad in The Echo that said, ‘So you want to be a DJ?’ I go over to the director of the radio station at the time and said, ‘I’m interested, and by the way, I can bring my own records if I need to.’

“He said, ‘Well, we’re interested, we’d love to have you participate, but you don’t need to bring your own records. We can provide those for you.'”

During his senior year, a friend, who was considering radio as a career, complained about his heavy number of shifts at Magic 105. Bunn off-handedly told him to drop his name to management. ” He kind of jokingly said, ‘I’ll let them know,'” Bunn said. “He came back to me later and said, ‘You know what? They’re interested.’ And I’m like, ‘You kiddin’ me?'”

Bunn, now director of candidate services in the UCA College of Education, said the romantic images many people have of the wacky DJ don’t really match the job description.

“I’ve never been one to focus on personality,” he said. “When I listen to the radio I can tell, maybe others can as well, when the person is really trying hard to be a persona. I never believed in that; I always believed the music spoke for itself.”

What radio lacked in debauchery, it more than made up for as an enjoyable hobby. And it still is – a year after Magic 105 folded, Bunn got a call from 94.1 The Point in Little Rock asking if he’d like to substitute on occasion, which he does to this day.

“I never pursued radio full time, never wanted to actually,” he said. “It was always a hobby that I got paid for. Not a bad gig. When people were spending a lot of money on their hobbies, I was making money on mine.”