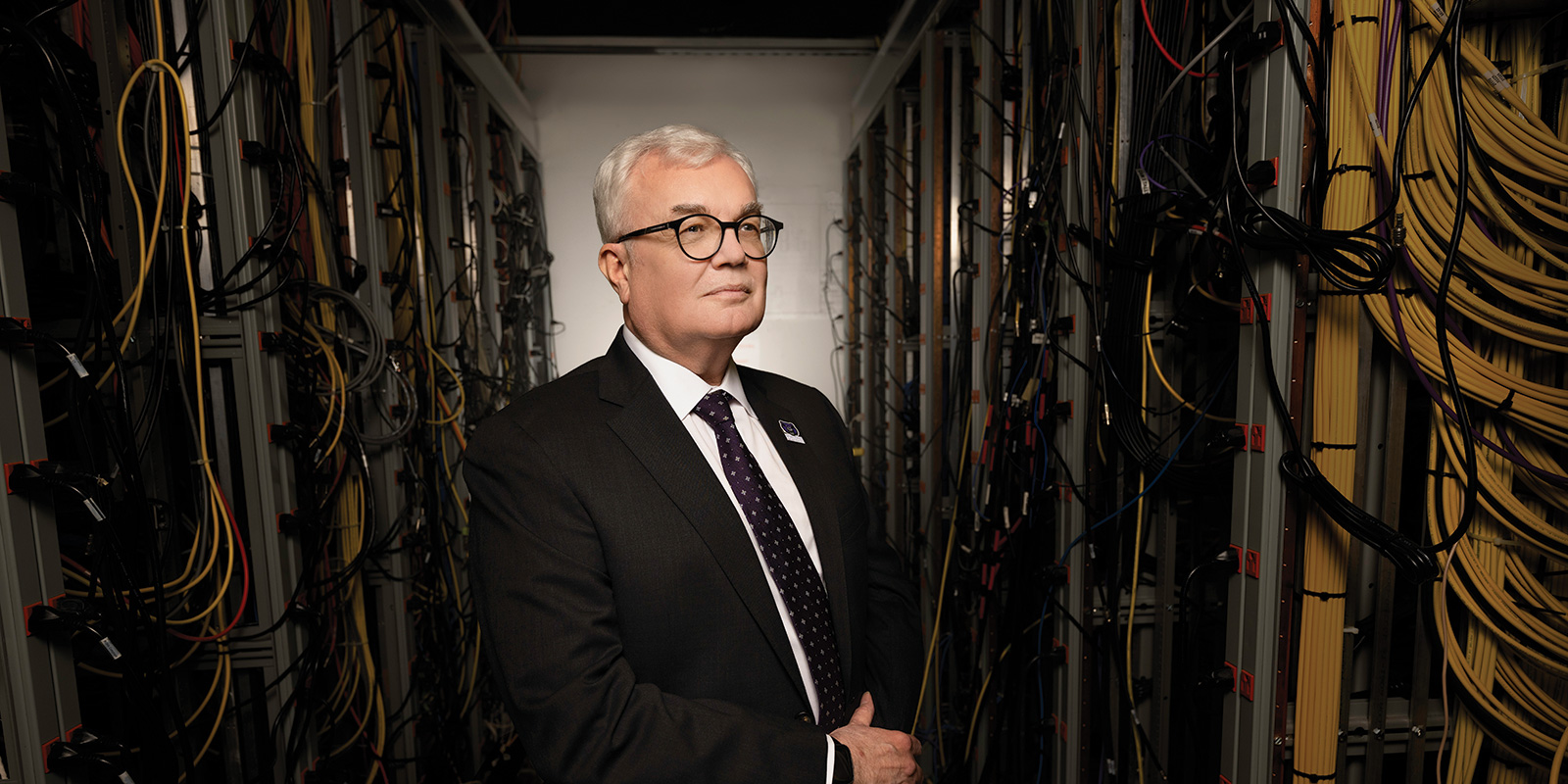 As a child growing up in Swansea, Wales, Stephen Addison developed an interest in the sciences. His homeroom teacher, a physicist, invited him to join a club where Addison built electronics such as radios and metal detectors. Addison was his teacher’s informal lab assistant at 13. By 16, he was taking his first computer science class.

Early exposure to science and technology laid the foundation for Addison to become a scientist, and for years he’s been working to make Arkansas more technologically competitive in his roles as faculty member and administrator in the College of Natural Sciences and Mathematics (CNSM) at UCA. A few years back, the University of Central Arkansas became home to the state’s first fully functional cyber range for educational training and began offering a bachelor’s in cybersecurity. The college is now working toward offering a data science degree.

“What we want to do is ensure that Arkansas is the vanguard of having people trained for that new economy, both in cybersecurity and data science,” he said. “We are moving in that direction.”

Addison arrived in the United States in 1978 and earned both his master’s and doctorate in physics at the University of Mississippi. While studying at Ole Miss, he learned that the UCA physics department, now the Department of Physics and Astronomy, was hiring.

Addison started as an instructor at UCA in 1984 and has held many roles in CNSM: associate professor, associate dean, physics department chair and even STEM Institute director. He has served as dean of CNSM since 2012.

As chair of the physics department in 2002, Addison sat down to compose a list of skills he believed would become increasingly important in the next 25 years and strategized ways UCA could fit into that vision. That was the first time he considered the notion that cybersecurity education could thrive at UCA.

“The goal is not just to have a great program in the department, but to build an infrastructure so that central Arkansas is a hub of cyber and data science activity,” he said. “So when people think about these things, they’ll think about, ‘There are great programs in Arkansas. If you want talent, that’s where you relocate your company.’ In order to really build things, you have to build beyond the university.”

Needing a strong foundation, Addison quickly got to work. The college recruited experienced faculty, developed its courses, and the computer science program eventually earned Accreditation Board for Engineering & Technology (ABET) accreditation. Over time, the program added computer engineering, a data science track for the computer science program and, most recently, a cybersecurity degree. With the support of a $500,000 grant from the Arkansas Department of Higher Education in 2017, the college houses the cyber range, a sandboxed environment that allows students to learn to detect and defend against cyber threats.

“If we want a first-rate cybersecurity program, we needed the state-of-the-art equipment, which was the cyber range,” Addison said.

Cyber threats harm society on all levels, from identity theft to medical records to everyday appliances, Addison noted. He pointed to a reported cyber threat in Oldsmar, Florida, from early February involving the hacking and attempted poisoning of the city’s water treatment system. In an increasingly technology-driven society with a continued need for data protection, the demand for cybersecurity professionals is only rising.

“All of our utilities are controlled by computers, and if you disrupt them, then that can wreak havoc,” he said. “It’s for reasons like that that cybersecurity is so overwhelmingly important.”

To complement the cybersecurity program, the college has been working toward implementing a standalone degree in data science. The program is subject to approval by the Arkansas Higher Education Coordinating Board this year.

“I think the future is rosy for all of those programs,” Addison said.

Addison also works to ensure that, through partnerships with K-12 schools and other colleges and universities, students across the state can use the cyber range. Addison was part of an effort to bring a $20 million National Science Foundation research grant to Arkansas last year. With UCA being one of the participating institutions under the grant, the university will help develop a system where students at two-year schools can eventually earn a four-year degree from UCA in computer-related programs.

Addison’s passion for improving the prospects of the university and the state might have to do with how much he enjoys Arkansas.

“I’ve been lots of places,” he said, “and I have to say that I can’t imagine living anywhere other than Conway, Arkansas.”