“This campus is over 100 years old, and no one thought about it, and that’s the only reason we didn’t have this resource for so long,” said Jennifer Cale, SGA’s vice president of finance.

In spring 2019, the University of Central Arkansas installed feminine hygiene product dispensers in women’s and gender neutral restrooms across campus.

Cale first considered the benefit of free feminine hygiene products when on a trip to Missouri State University. The then-senior in high school noticed a box of pads and tampons in a campus restroom. When she enrolled at UCA, she joined SGA with the goal to impact campus in a similar way. 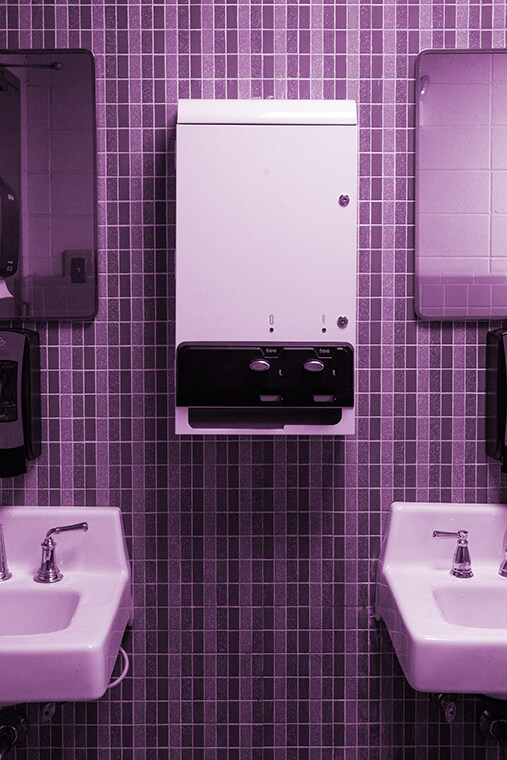 When Cale first brought up the idea at an SGA retreat, the response was “crickets,” she said.

“I think a lot of people probably felt like it wasn’t an achievable mission,” said Amber DiPersia, SGA’s junior class president. “A lot of things that seem really out of reach might get ignored.”

To get the initiative moving, Cale and DiPersia teamed up and began researching other institutions that offered free feminine hygiene products to students. They brought a motion to SGA to allocate money to a pilot phase of the product dispenser program, which passed unanimously.

“They basically paid for it the same as they would with paper towels and toilet paper, and they didn’t raise tuition for it,” Cale said.

“That way it keeps people in class,” DiPersia said. “You don’t have to run back to your dorm to go get something. If you get your period in class, you can just go to the bathroom and solve the issue right there, and then you’re back in the class.”

As part of their research, Cale and DiPersia met with Adam Hensley ’15, recycling and custodial services manager at the Physical Plant, who they say was their biggest help. Hensley conducted research on vendors, feasibility and more.
“It was pretty awesome because they knew what they wanted,” Hensley said. “They didn’t necessarily know 100% how to get there, but they knew they needed to talk to different people, and they kept trying to get more and more people on board. I think without them doing that this project really wouldn’t have ever got off the ground.”

Nonresidence hall buildings that are planned for future construction will also include dispensers, Hensley said.

“It definitely keeps students in the classroom, which is an important thing,” he said. “But I think this shows, moreover, that if you actually put your mind to something and you have something that you want to be successful with on campus or elsewhere, as long as you just keep working at it and put in the work that you can make stuff happen.”

Cale said SGA and UCA are always open to work with student ideas.

“The university deeply cares for its students,” she said. “Even though an idea or a project or a change that you want to see on campus may be shut down or delayed or whatever, it won’t fall on deaf ears. The administration here is very responsive about everything that a student brings up, and they will do everything in their power to make your experience on campus better.”