Four employees came together to open a food bank on the UCA campus after recognizing that some students, as well as employees, go hungry each day. The Bear Essentials Food Pantry opened June 11 in Old Main. 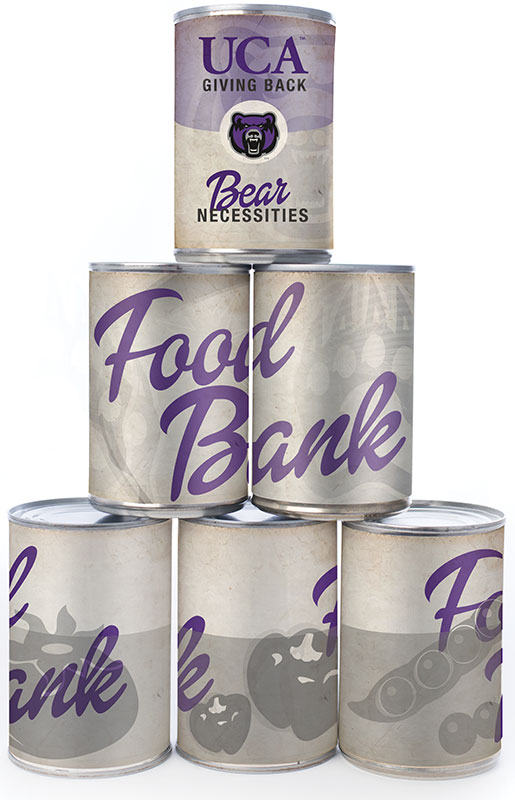 James had been contacted by Dr. Melissa Shock, associate professor of nutrition in the Department of Family and Consumer Sciences, about the possibility of starting a food pantry. Shock formerly worked at a local food bank and witnessed students receiving help.

Marvin Williams, UCAN coordinator and academic advisor, said that he recognized the need for a food pantry when he met with a student about two years ago who had very little to eat. Williams gave the student a list of nearby food pantries, but the student told him that she did not have a way to get to the locations. In response, Williams took the student to the cafeteria and paid for her meal.

Dr. Reesa Ramsahi, UCA counselor, also met with the same students. “That was the last student we wanted to see in that situation,” said Ramsahi. She has encountered traditional, non-traditional, and international students, as well as employees who had mentioned just in conversation that they had very little to eat. While students can purchase a meal plan on campus, some may not qualify for a meal plan because they do not live on campus or simply cannot afford to eat at the cafeteria or student center on a regular basis.

“It was really serendipitous that all of us happened to catch wind of each other and team up,” James said.
For now, the food pantry will be open on Wednesdays from 11 a.m. until 1 p.m. or by appointment at Main Hall 108 until there is more need.

The process of receiving assistance from the pantry is simple and confidential. A student or employee can fill out the paperwork either on the Food Bank website, uca.edu/foodbank, or in person and show UCA identification, and pick up the food.

Each recipient gets a bag filled with one jar of peanut butter, one jar of jelly, one can of pasta sauce, three cans of vegetables, one can of fruit, two cans of soup, one box of macaroni and cheese, two cans of tuna or chicken, one muffin mix, one package of rice, one package of spaghetti, one box of oatmeal, five packages of ramen noodles, and one box of instant potatoes each calendar month.”Right now, [the food] will just fill gaps,” Shock said.

Shock said, “I was amazed how fast the pantry came to be.” She is glad that students and employees now have somewhere to get nutrient-dense food even if they can’t afford it.

While the four planners had differing experiences that led to the idea of having a campus food pantry, the sentiment behind their motivation seemed to be identical: Students can’t succeed if they are hungry. Bear Necessities will make sure they are not. 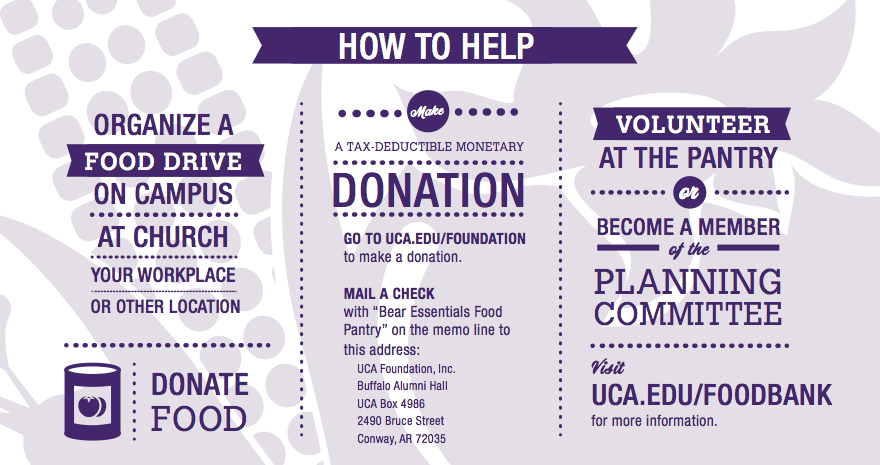