The University of Central Arkansas has undergone many changes since its 1907 establishment, from beginning as a training college for teachers to now being a premier destination institution with more than 160 undergraduate and graduate degrees and certificates. Throughout this time, many of the university’s departments, programs, divisions and other units have achieved incredible milestones and successes.

These are some of the recent milestone anniversaries for the university.

Whether the institution was known as Arkansas State Normal School, Arkansas State Teachers College, State College of Arkansas or the University of Central Arkansas, Old Main has served every generation of student. Completed in 1919, the structure is the oldest building on campus.

“Old Main sits in the center of campus and serves, in many ways, as both the physical and symbolic center of UCA. It represents UCA’s history while remaining an active part of the university with classrooms, the Ida Waldran Auditorium and a number of campus services housed in the building,” said Julia Winden Fey, director of the Office of Student Success.

The structure, added to the National Register of Historic Places in 2011, marked its 100th “birthday” in February.

Winden Fey was one of several committee members who worked to plan a birthday party as a way to celebrate the life and experiences of the historic structure.

“Instead of just noting that this particular pile of bricks and mortar has been here for over a century, we wanted to honor the many experiences of students, faculty, staff and community members that have taken place within its halls,” Winden Fey said.

Originally known as the Administration Building, the structure housed the library, classroom spaces and all administrative offices, including the president’s office and registrar’s office.

Ida Waldran Memorial Chapel, now Ida Waldran Auditorium, was added to the original building in 1937 and named in honor of the school’s first dean of women, Ida Waldran. 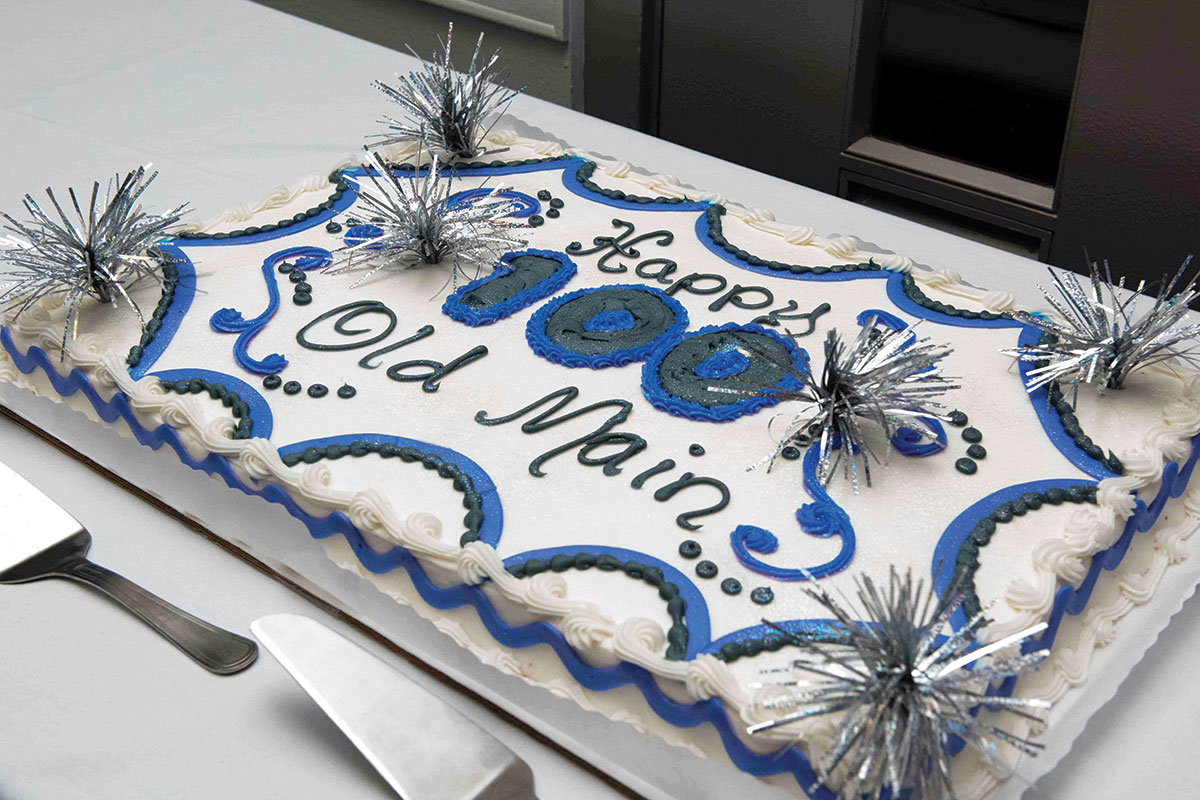 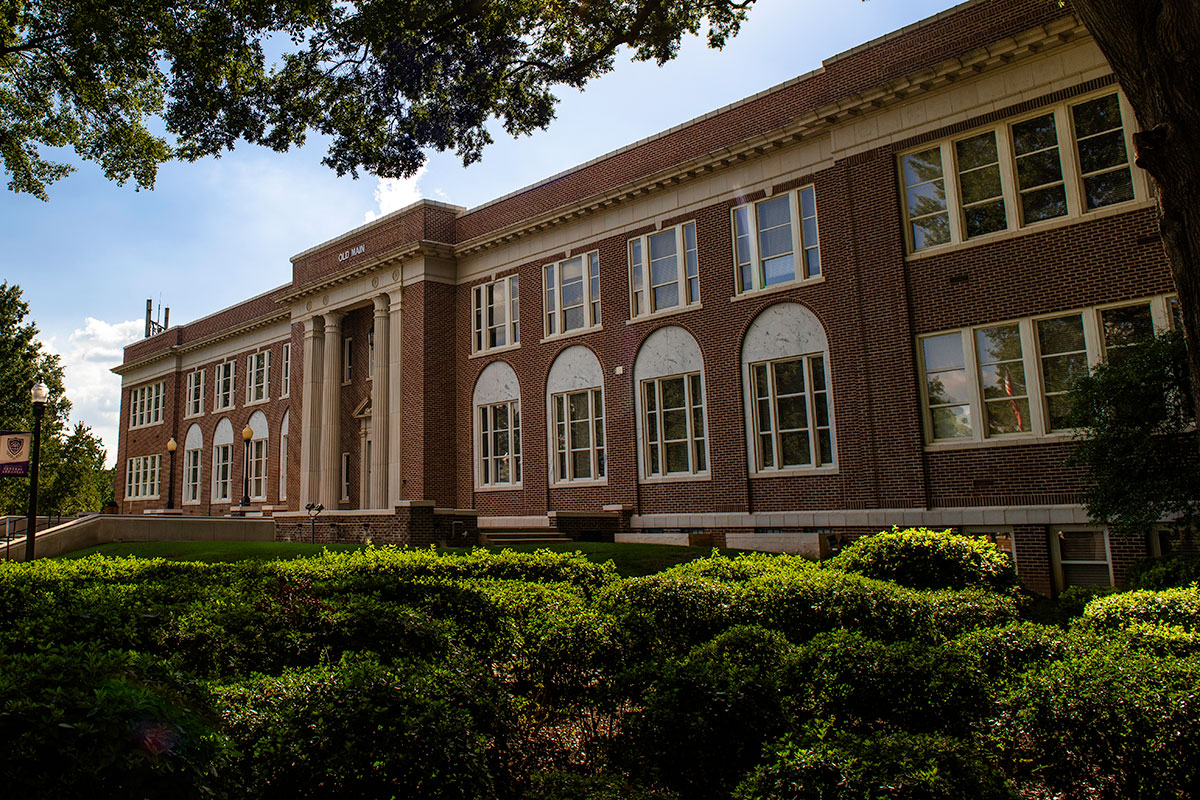 “Although UCA’s campus facilities have expanded greatly in the last century, Old Main continues to serve students and the community alike, and likely will do so for many more years,” Winden Fey said.

The Division of Outreach and Community Engagement (OCE) marked 100 years with a celebratory gathering in April.

The division began in 1919 as the extension department at Arkansas State Normal School, now UCA, with only 91 students enrolled in classes the first year. By the second year, more students were enrolled in extension courses than were enrolled in traditional college courses. Today, the division has grown to serve thousands of individuals annually with its classes, programming and services.

“We give people access who may not have traditional access to education,” said Shaneil Ealy ’03, associate vice president of the division. “I see us as a unit who is responsive to the community from 100 years ago to today.”

The division also includes UCA’s service-learning initiative that integrates meaningful community service with classroom instruction. Through this initiative, the university has partnered with many local organizations and provided thousands of hours in service.

Held in April, the 100th anniversary brought former deans, staff and employees back to campus to share their experiences. Many of the comments focused on the division providing opportunities for lifelong learners and being a trendsetter.

“OCE was integrating classes before the integration of the university. We were breaking barriers back then,” Ealy said. “We are responding to what the community needs beyond traditional education, and so that was exciting to see that we are still carrying that legacy.”

The division also provides programming, services and classes for adults and youth such as ACT prep, culinary education and professional development, as well as hosts hundreds of events in university facilities through its conference services department.

Ealy believes OCE will continue its legacy as a community leader.

“That has been the thread throughout these 100 years,” she said. “We’ve always been that connector to the community, and it’s always going to be that way.”

Since its inception July 1, 1969, much has changed in and around the College of Business.

The college has called numerous buildings on campus home before moving into its current 78,000-square-foot building in 2010. New programs, departments and fields of study have come and gone, but one thing has remained the same: the college’s unwavering commitment to providing a high-quality business education.

Today, the college has more than 1,600 students and offers 13 baccalaureate degrees, two master’s and one graduate certificate, and houses the state’s only insurance and risk management program.

The college boasts more than 10,000 alumni scattered across the U.S. and the globe, working in various industries including accounting, finance, economics, marketing, management, information technology, logistics and insurance.

In marking its 50th year of existence, several alumni are being highlighted across multiple media channels. The college also has other activities planned throughout the year marking this milestone anniversary.

The Association to Advance Collegiate Schools of Business (AACSB), the premier business education alliance, accredited the college in 1984. Less than 5% of business schools worldwide have AACSB accreditation. The accreditation, for undergraduate and graduate programs, exemplifies the college’s commitment to excellence and the value it provides its graduates.

“Since its founding, the UCA College of Business has become a leader in business education. Fifty years’ worth of graduates cover the state, region and beyond in sectors and industries across government, nonprofits and private business,” said Michael B. Hargis, dean of the College of Business. “Our past successes give us the foundation to look toward the future and solidify our place among the top business schools in the country.”

The School of Nursing was established in 1967 after the closure of a baccalaureate nursing program at another Arkansas university brought 100 nursing students to Arkansas State Teachers College, now UCA. The first class of 29 baccalaureate students graduated in the spring of 1969.

In April, nursing alumni and friends celebrated the 50-year anniversary of the first graduating class. Alumni from several of the School of Nursing’s earliest classes were present for the weekend celebration. One honored guest was Mary Anne Parsley ’70, ’80, a nursing alumna and former School of Nursing faculty, who provided remarks during the event.

Since 1967, the School of Nursing has played a leadership role in nursing education and has been an integral part of the university’s academic community.

Located in the College of Health and Behavioral Sciences, the School of Nursing programs include the Bachelor of Science in Nursing, Master of Science in Nursing and the Doctor of Nursing Practice. Consistently responding to the needs of students, changes in health care and education standards, UCA’s nursing degree programs ensure that students are prepared for a quickly evolving health care environment.

SOS is a group of student volunteers that works with new students to ease the transition from high school to college. Each SOS member volunteers approximately 200 hours of service to the university between April and August of each year.

Lindsey Shurley ’08, the current director of New Student Programs at UCA, said SOS boasts at least 1,200 alumni including individuals such as former mayor of Conway Tab Townsell ’84 and Brad Lacy ’94, who is former chair of the UCA Board of Trustees and president and chief executive officer of the Conway Area Chamber of Commerce, as well as Warren Readnour ’90, UCA general counsel.

The 40-year reunion brought approximately 120 SOS alumni back to campus for a weekend of events hosted in September. At least 37 years of SOS leadership was also represented as former leaders such as Fred Rhodes, Charlotte Strickland ’81, Hank Phelps, Colin Stanton ’04, ’06 and Lindsay Henderson ’03, ’04 were also in attendance, Shurley said.

Also in continuing that legacy, the Student Orientation Staff Scholarship has been created to support an SOS student with a financial need.

Established in fall 1979 under the direction of Rhodes, former dean of students at UCA, SOS students were chosen from the Student Senate and Royal Rooters, now the Student Government Association and Bear Den, respectively. Today, students are selected based on academic standing, campus involvement and dedication to service through an application and panel interview. The current group boasts about 90 members.

The Student Interest Committee was first established in 1920 and was comprised of five members who were appointed by the university president. They sponsored receptions, dances and tea parties. In the 1940s, the organization became known as the Student Council, and in the mid-1950s, the group was renamed the Student Senate.

It was during this time that the scope of work for the student-led organization began to grow. The Student Senate began to hear complaints about food service and residence halls, as well as other duties. They also polled the student body about women’s rights, extended library hours and purchased a printer for student use at Torreyson Library.

In the late 1980s, the group’s name was changed to the Student Government Association, which serves as the voice of the student body. It comprises 39 senators, four executive board officers, one chief of staff and four advisers.

The SGA is now planning for its 100-year anniversary in 2020. While plans are still underway, one activity for the group is a centennial banquet for current and former SGA members, UCA administrators and other guests. The SGA will announce a full schedule of events once all details are finalized.