Technology has been the common thread in all the different facets of Dr. Michael Mills’ career.

Mills, assistant professor in the College of Education’s Department of Teaching and Learning, is an Apple Distinguished Educator (ADE). His teaching integrates technology into the curriculum, and he loves to share strategies with others who want to do the same.

Mills has been at the University of Central Arkansas since 2011 and will go up for tenure in fall 2016. He started, however, as a finance major at Louisiana Tech University in Ruston in the early 1990s.

“When I was in finance, it was the lure of those old financial calculators,” he said. “I love crunching numbers, but I also love to teach. And teaching is the community.

“I love working with people who want to learn more — and who don’t mind me learning along with them. That’s why I love UCA.”

Mills grew up in central Louisiana and began his college career as an English minor. But as a senior in college, he realized he didn’t want to pursue finance.

“It was just a sales job, and I did some teaching on the side and really liked that,” he said.

He met his future wife in college, the former Michelle Cantley of Crossett, and while she was finishing her undergraduate degree, he pursued a master’s in English education through a nontraditional licensure. He wanted to be a high school teacher.

He took a teaching job at Brinkley, but he and his wife lived in Little Rock. It was an hour-plus, one-way trip.

“I loved those kids at Brinkley, but after three years, the mileage started to wear on me,” he said.

Along the way, he decided to pursue a specialist certification at the University of Arkansas at Little Rock, but while he was there his adviser planted a seed.

“I liked taking classes, and I believed in education,” he said. “My adviser said, ‘Why don’t you work on a doctorate?’ I said, ‘No, that’s for smart people.’ He said, ‘It’s three more classes and a bigger research paper.’ 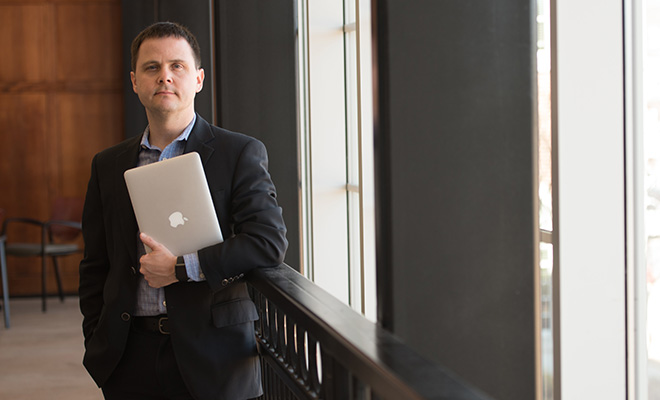 He completed his Doctor of Education in educational leadership in 2000. In addition to adjunct positions at three Arkansas institutions, he also spent seven years teaching at Sheridan and later worked for the Benton School District from 2004 to 2011.

At Benton, he was part of a pilot program to get laptops to every student. That’s where he became familiar with Apple, even though he had always been a PC man.

“I stayed away from Macs because I liked to build my own computers,” he said. “I was the furthest thing from a Mac.”

But after arriving at UCA, he pursued the ADE program. According to the Apple website, ADEs “advise Apple on integrating technology into learning environments — and share their expertise with other educators and policy makers…. They are ambassadors of innovation.”

“I thought, ‘What the heck?'” Mills said. “For tenure they said, ‘You need to be recognized,’ so I thought I’d just put it out there and see what happened. Maybe I’ll get some good feedback.”

He was certified as an ADE in 2013. He travels yearly to institutes with peers from all over the world to listen to and share with industry leaders. In 2015, Mills was chosen for a three-year term on the ADE Regional Advisory Board for the Americas.

“That allows me to have even more direct conversations with other educators and people with Apple,” he said. “I told one of the Apple reps, ‘Apple is going to be fine. Teachers don’t know how to use these things in a transformative way. It’s very important for us to take these resources and use them in ways that will help students.’ ”

Among Mills’ recent honors are UCA’s College of Education Faculty Teaching Award in 2015, Arkansas Council of Teachers of English/Language Arts College Teacher of the Year and Arkansas Association for Instructional Media Technology Leader of the Year in 2014.

In his spring 2016 classes, Classroom Assessment and Models of Teaching, he integrates Apple and other technologies such as Google Classroom and Google Hangouts, as well as social media such as Twitter.

He gets teased, he said, when he pulls out a pen and notebook in meetings.