Transformative gift from Windgate Foundation will impact Arkansans for generations

“I think there’s something uniquely empowering about having people believe in your dreams, perhaps even moreso when that belief is in your work,” said University of Central Arkansas fine arts student and Windgate Foundation Scholar Louise Mandumbwa. “It validates the part of you that believes you just might have something worthwhile to offer the world.” 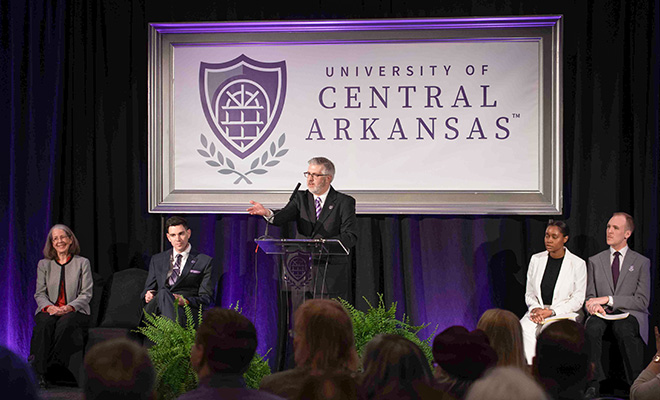 With numerous television cameras rolling, Mandumbwa spoke before a standing room-only crowd gathered in McCastlain Hall on Jan. 22. Just moments earlier, students, alumni, donors and others listened with rapt attention as President Houston Davis announced the largest gift UCA has received in its 111 years — a $20 million challenge gift from the Windgate Foundation.

As two of UCA’s Windgate Scholars, Mandumbwa, an international senior from Botswana, Africa, and Grayson Ruple, a senior from Bryant, were invited to address the audience and underscore the impact of Windgate’s generous support.

It was a historic moment that will forever be celebrated, the announcement that catapulted UCA to the next level of giving and serving students.

“There are moments that come in the life of an organization, that change its trajectory, that propel it to new thresholds of possibility, to new realms of impact and to new levels of service,” Davis said during the announcement. “A transformative gift such as this one does indeed become transformational for the university.”

“This [gift] raises the baseline for UCA. It puts us in a different league,” said Kale Gober ’09, vice president for University Advancement and president of the UCA Foundation. “This lead gift, during the initial phase of our comprehensive capital campaign, signals to all that now is the time to invest in UCA.”

A total of $19 million of the gift will support the new state-of-the-art Windgate Center for Fine and Performing Arts. The remainder of the project will be funded through additional private gifts and other resources, for a total estimated cost of $45 million. The final $1 million from Windgate will be added to the current Windgate Scholarship Fund, which helps students like Mandumbwa and Ruple pursue their arts degrees. The fund was established within the UCA Foundation in 2005, and since that time, 30 students have been awarded a total of more than $400,000.

The need for this new facility is great. Today, more than 250 students major or minor in art, and another 750 major in the other fine arts and communication areas. Student enrollment for all departments has remained at capacity for the past decade.

“This gift will allow us to fulfill the facilities and scholarship needs that are worthy of our outstanding faculty and students. We will be able to help more students earn degrees in art and related disciplines while also graduating a workforce of creative problem solvers, critical thinkers and independent learners. We thank Windgate Foundation for their partnership and incredible show of confidence in UCA’s vision for the arts,” Davis said. 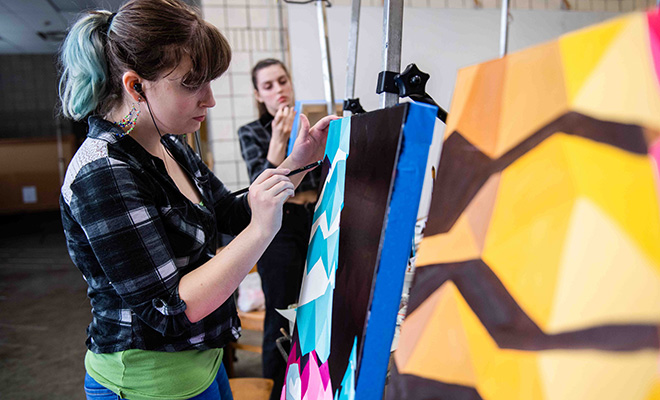 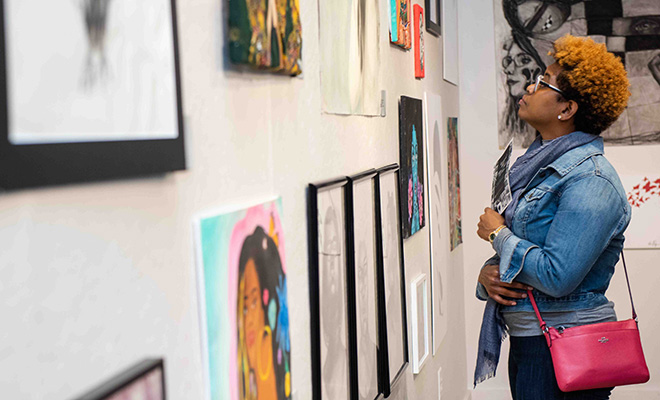 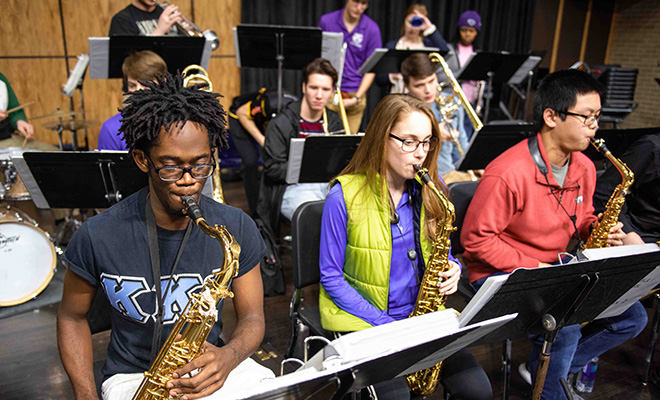 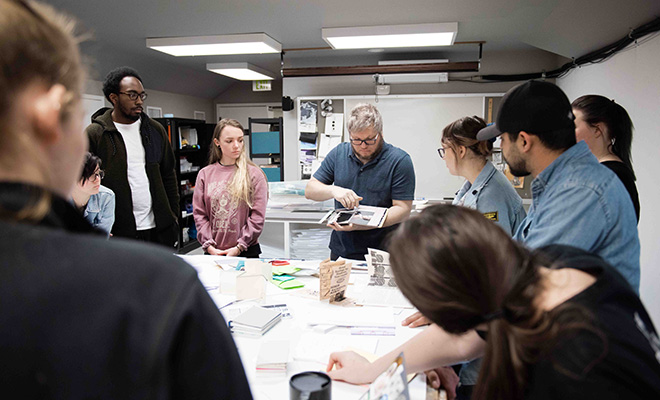 As of press time, plans for the world-class facility include a gathering lobby with art exhibition space; a 175-seat black box theater and experimental lab; a scene shop; a 450-seat concert hall designed for orchestra, choir, band and ensemble performances; a rehearsal/recital hall; a percussion studio; and several other music studios and practice rooms. The facility will add much-needed class, studio, rehearsal and design space, which will increase program capacity. It will also foster interdisciplinary collaboration between the visual arts, theatre and music.

“The Windgate Center for Fine and Performing Arts is going to have a ripple effect that will last down through the generations,” said Terry Wright, dean of the College of Fine Arts and Communication. “Fifty years from now, that building is going to have a history of affecting thousands of students, faculty members and community members.”

“With this new facility, our students will be at the front and cutting edge of what’s possible in the arts,” said Patricia Poulter, provost and executive vice president. “They’ll be prepared to go out and change the communities in which they engage.”

The Little Rock-based Windgate Foundation is a private grant-making foundation established by an Arkansas family in 1993. Its principal goals include funding significant educational programs in contemporary craft and visual arts, and in art history preservation efforts, as well as providing funding to K-12 and higher educational institutions to develop and support the arts, scholarships and effective instructional programs. To date, the Windgate Foundation has provided more than $751 million in grants in these areas. 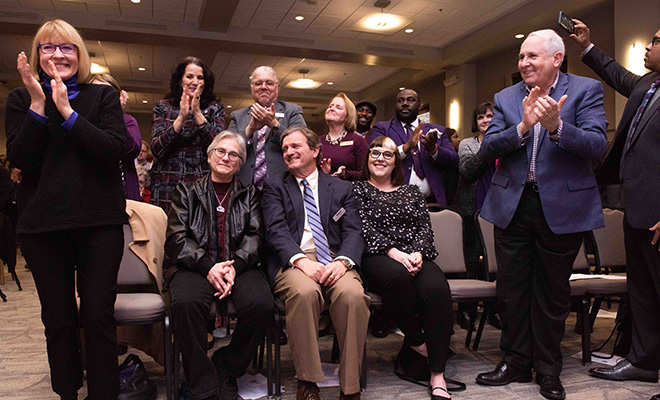 “Windgate Foundation has supported visual arts, contemporary craft and art education programs in the United States for 25 years,” said Patricia Forgy, executive director of the Windgate Foundation. “For almost 20 years, we have proudly partnered with UCA and are delighted to continue our support for their new Fine and Performing Arts Center. The faculty and administration are supportive and enthusiastic, and we know this improved facility will be a great benefit for the students.”

UCA has been invested in the arts since its early days. In fact, the Department of Art was one of the original eight departments when UCA was established in 1907. Over the years, the university has celebrated many strategic accomplishments in the arts, including: founding the Arkansas Shakespeare Theatre, which is the only professional Shakespeare repertory company in the state; progressing toward All-Steinway school status; and offering acclaimed courses and terminal graduate programs one can only find at UCA.

The Windgate Center for Fine and Performing Arts will be situated at the corner of Donaghey Avenue and Bruce Street and will serve as a cornerstone of the campus that encourages participation in the arts and provides a unique experience for students, faculty and visitors. The facility is expected to be completed in the fall of 2022.

“This new project is much more than a building,” said Davis. “It is a necessary and pivotal step in our ongoing efforts to transform lives and make an impact in Arkansas and beyond.”