“This is an incredible opportunity UCA has given us,” said Hailey Durham, president of the Panhellenic Council and member of Delta Zeta. “Being able to live in a home together will help us grow even more as a sisterhood.”

“Greek Village is going to be a tremendous recruitment tool for this University,” said Dr. Gary Roberts, dean of students. “When students and parents drive through campus and see these huge, colonial style houses with these pillars outside, and the NPHC Complex, they are just going to say, ‘Wow!'”

The UCA Board of Trustees approved a $13.8-million bond issue to finance Greek Village in 2013. Housing and chapter rooms for fraternities and a community center that will provide public space for all Greek organizations is slated to be constructed later. 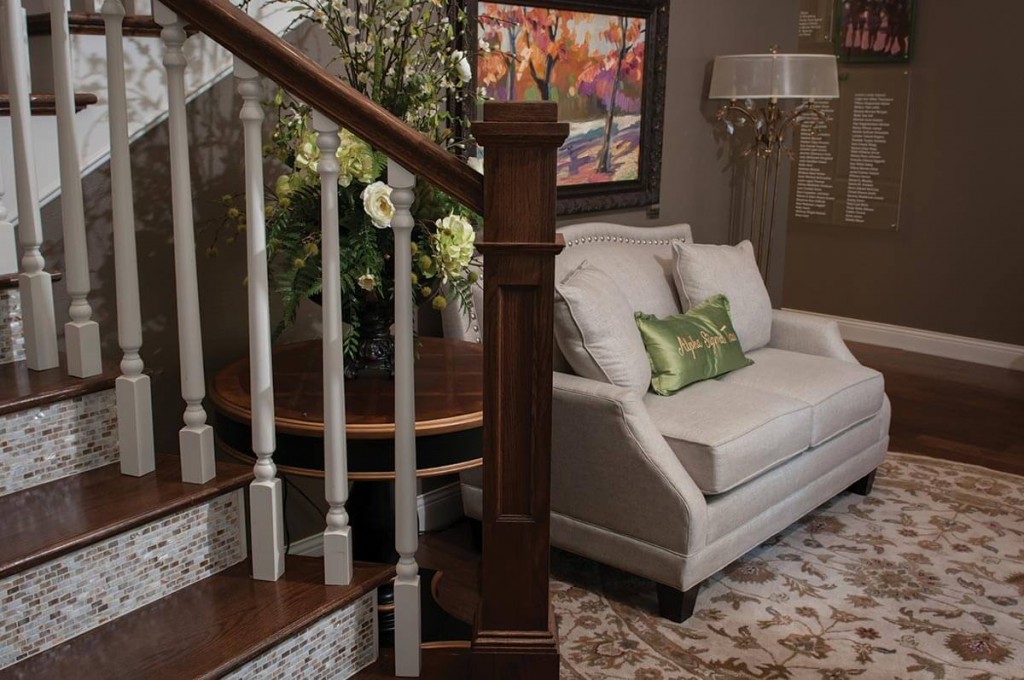 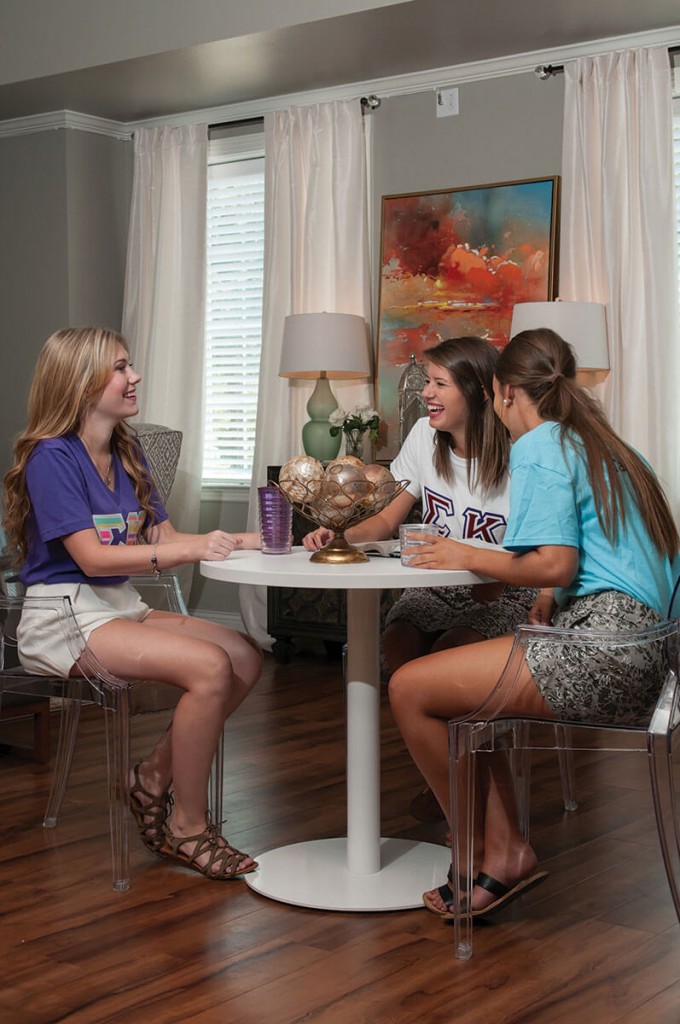 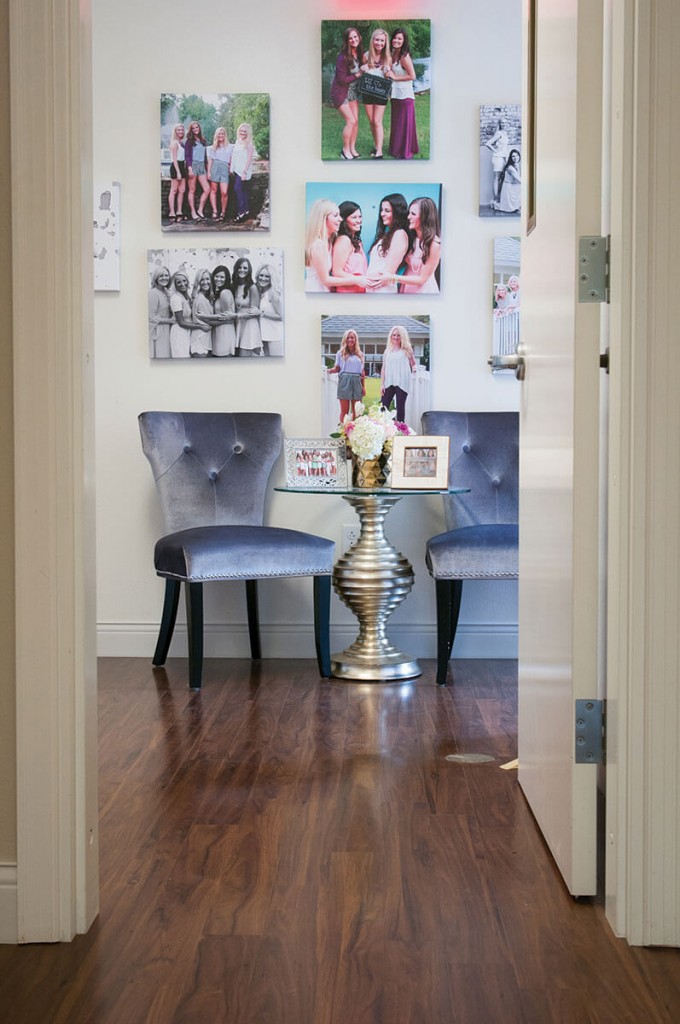 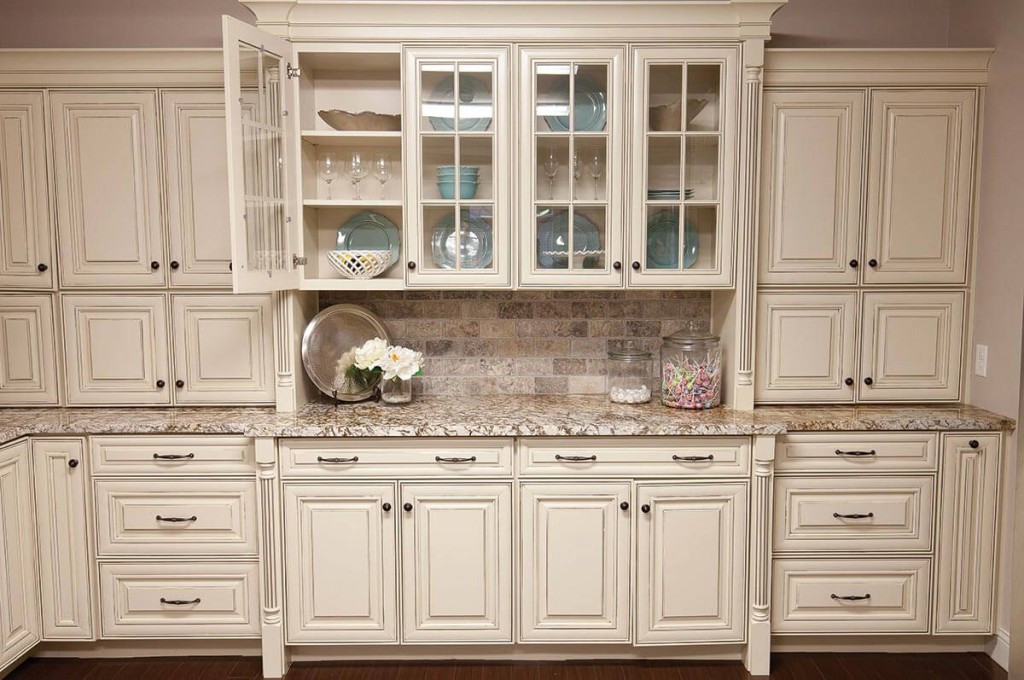 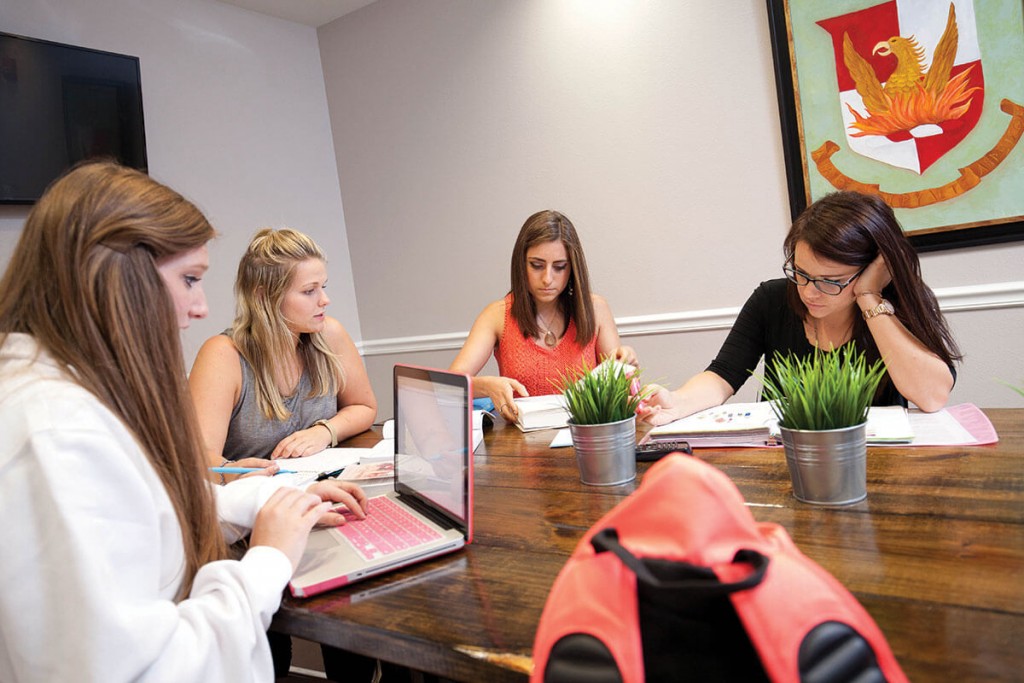 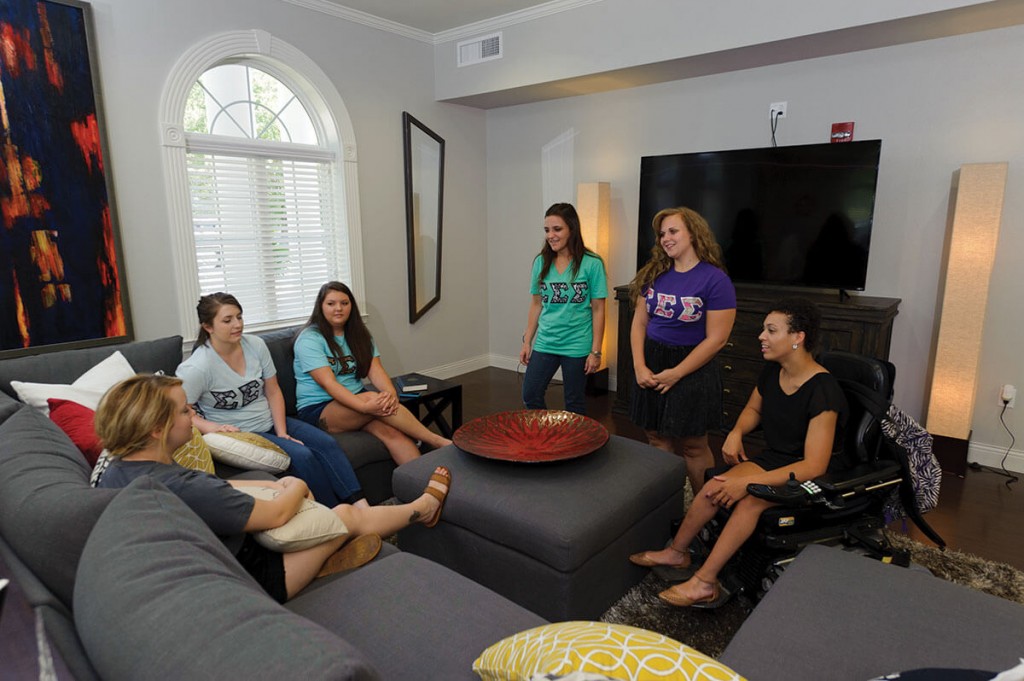 Each 10,400-square-foot sorority residence includes kitchen and laundry facilities, chapter rooms for meetings and events and living space for up to 32 students. The University provided a “base standard” plan for the Greek homes. Sororities upgraded their facilities with features such as crown molding, granite countertops or custom cabinetry by raising private funds from Greek alumnae.

“They labored and cried and sweated over decisions, design decisions. Someone had to decide every detail,” said Lindsey Shurley ’08, assistant director of Student Life and National Panhellenic Council and Interfraternity Council. “They are proud of their accomplishments and the new traditions they get to start.”

Greek Village sits on the northern section of campus with three homes on Donaghey Avenue and two on Augusta Avenue. The NPHC Sorority Complex sits at the intersection of College and Augusta.

“I think that these houses are really going to bring each sorority closer as a unit simply because each sorority is essentially in each other’s backyard,” Durham said. 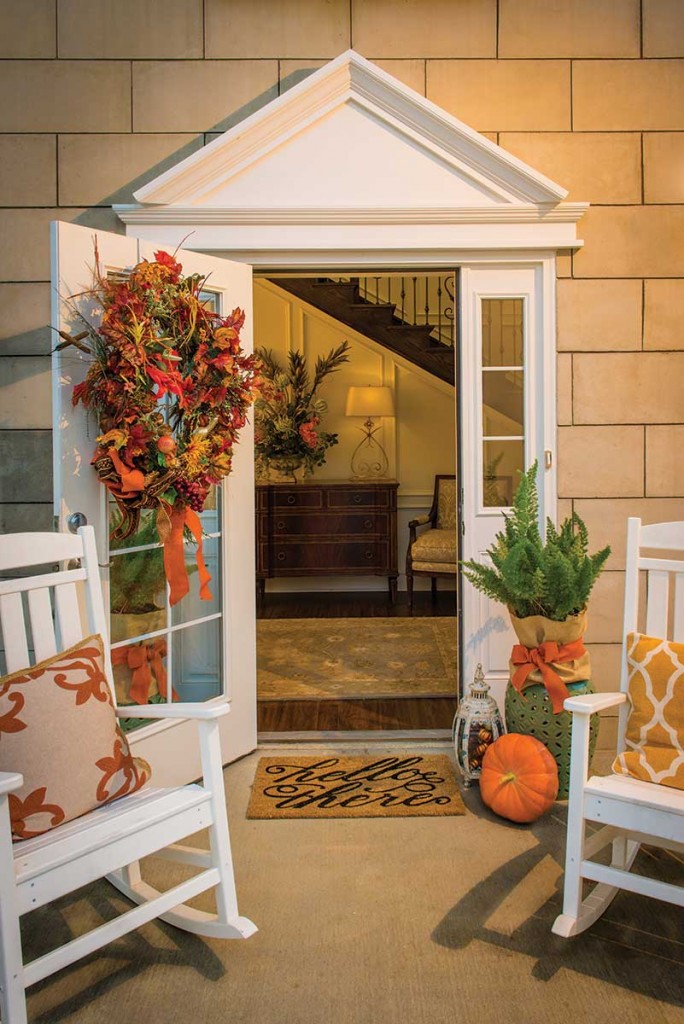 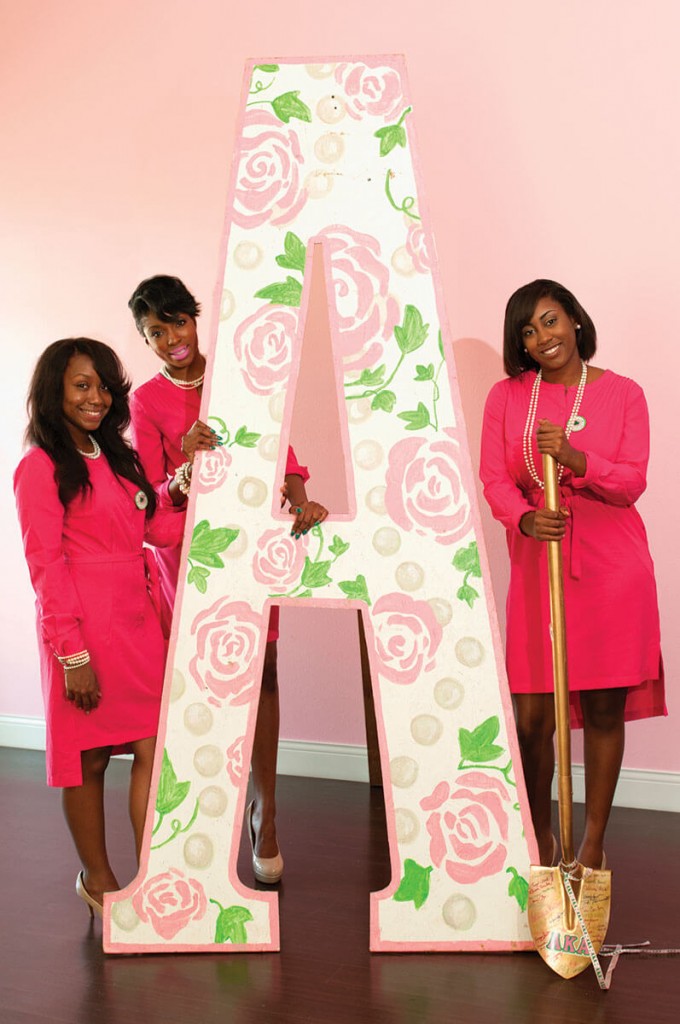 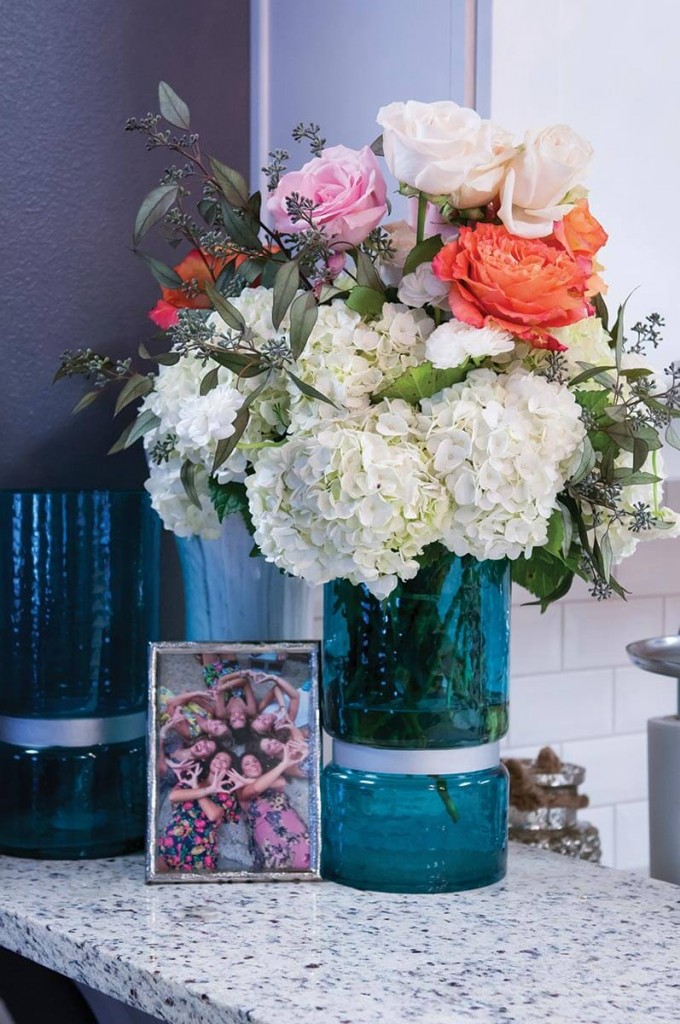 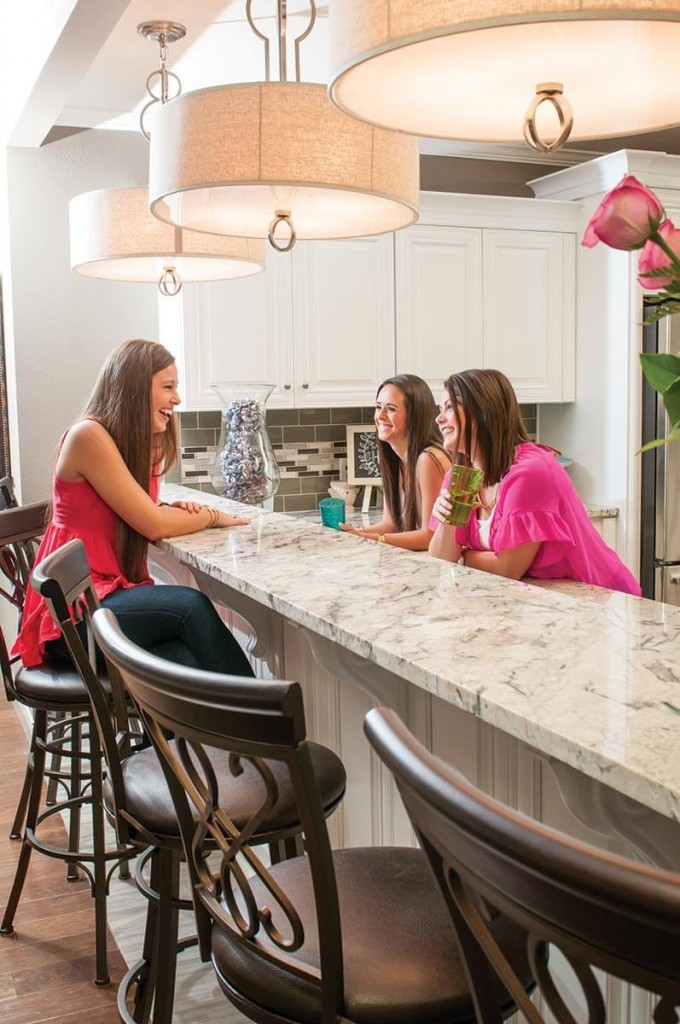 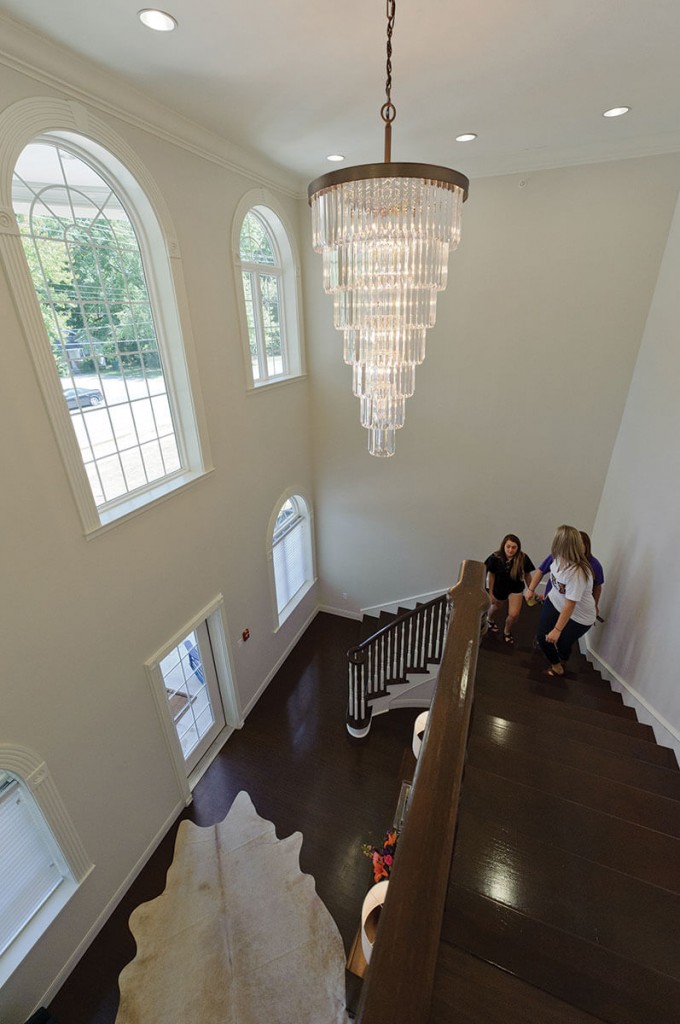 The close proximity of the residences will also allow the Greek women greater opportunities to fulfill their organizations’ legacies and founding principles.

“They may have programming about breast cancer awareness or another topic that would engage and serve the campus,” said Wendy Holbrook ’87, ’89, associate dean of Student Life. “These aren’t environments of elitism. It’s all about being a part of the Bear community. I think that’s impactful.”

The four NPHC sororities have a unique prominence in UCA’s Greek Village with the NPHC Sorority Complex.

“Our rooms give us a guaranteed space for functionality and meetings and events,” said LaDasia McCullough, NPHC president and member of Zeta Phi Beta. “The possibilities are truly endless for usage of these chapter rooms.”

The complex has a common area that bears each organization’s shield. Through Greek alumnae giving, each chapter was able to customize their chapter room with accent walls using each organizations colors, as well as symbols and memorabilia that pay homage to their founders and guiding principles.

“There have been tireless efforts from each organization to garner support for Greek Village from alumnae. The response and outpour of support has been truly overwhelming and heartwarming. It is a true example of sisterhood,” McCullough said.

NPHC sororities have different membership recruitment and intake processes than that of other councils, making them too small to accommodate a Greek residence. The University made special effort to include NPHC organizations in Greek Village.

“When you compare UCA to other institutions of higher learning, you will not find a structure like the NPHC Sorority Complex in place based on size and based on history,” said Ronnie Williams, vice president for Student Services and Institutional Diversity. “It is a unique feature, but I think it speaks volumes of the University’s commitment to all of our students.” 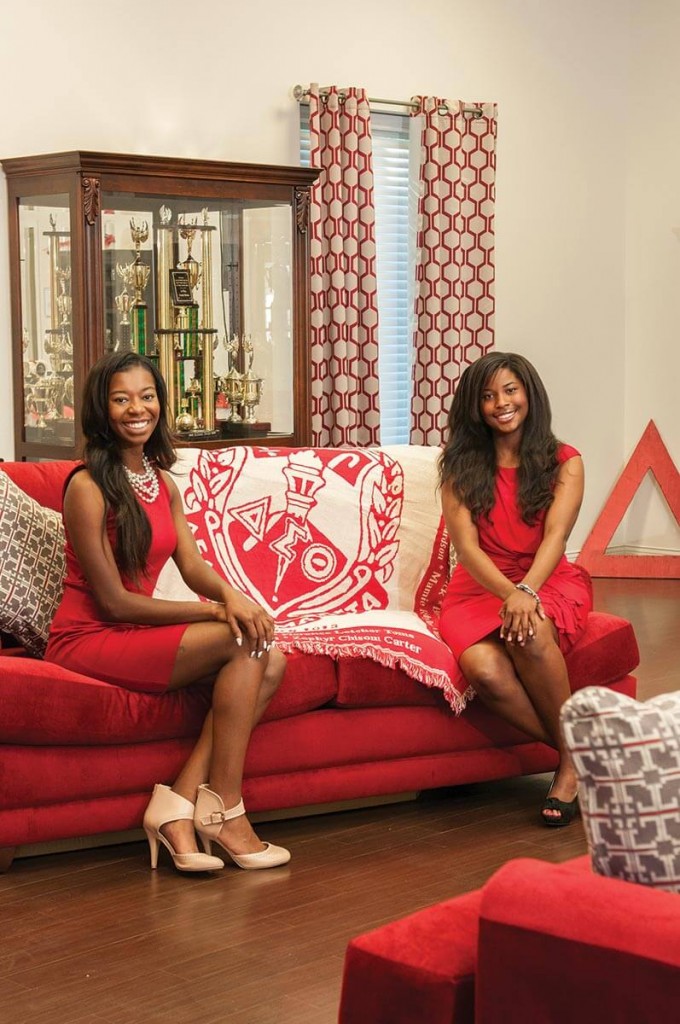 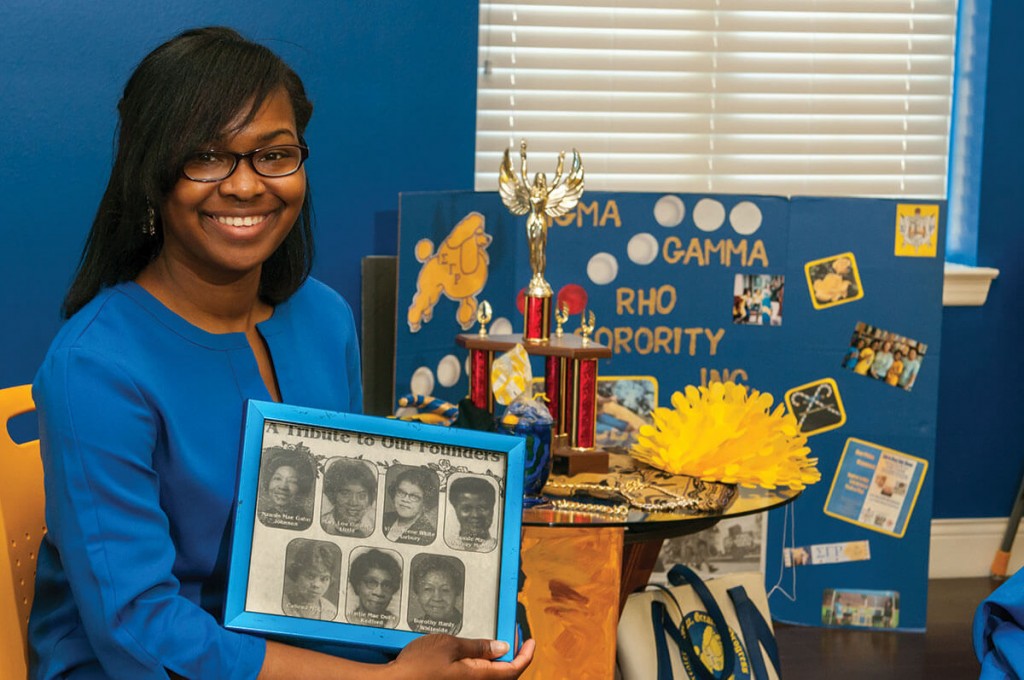 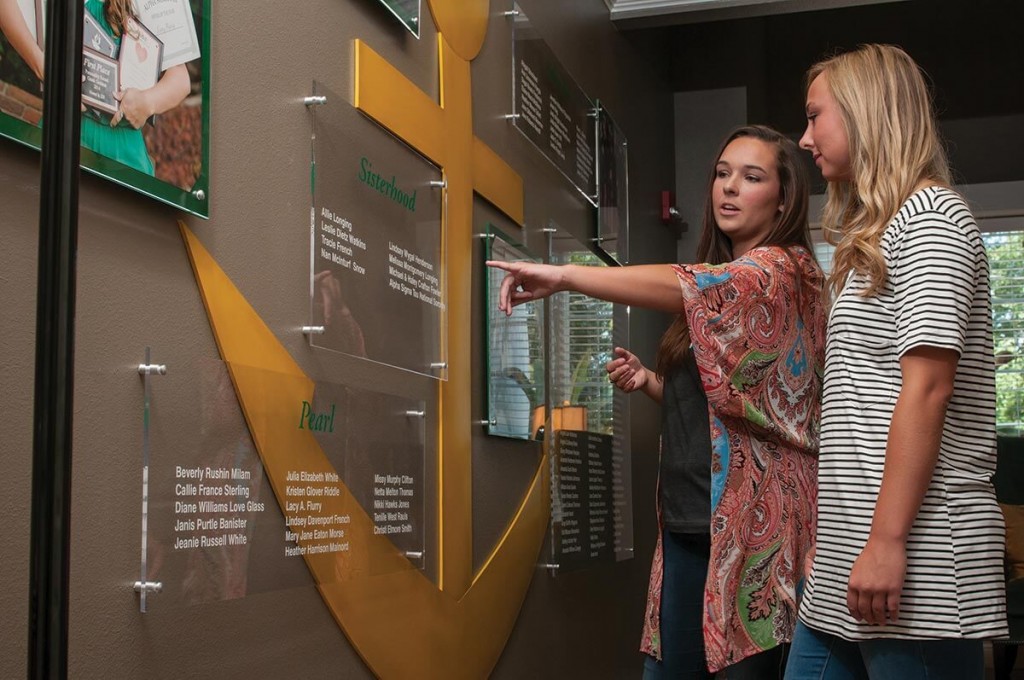 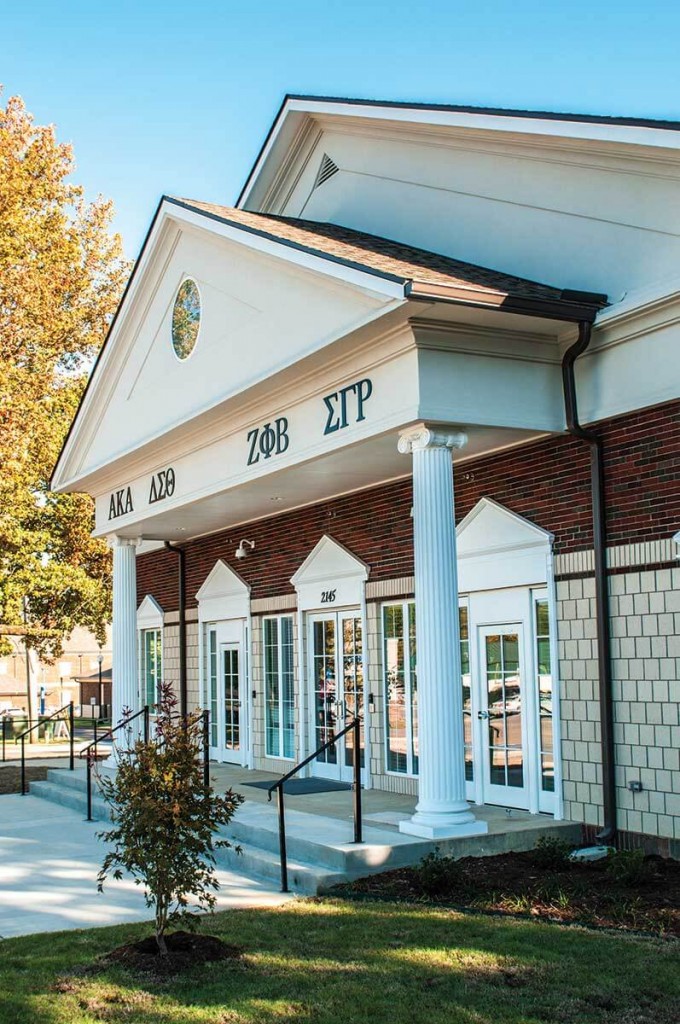 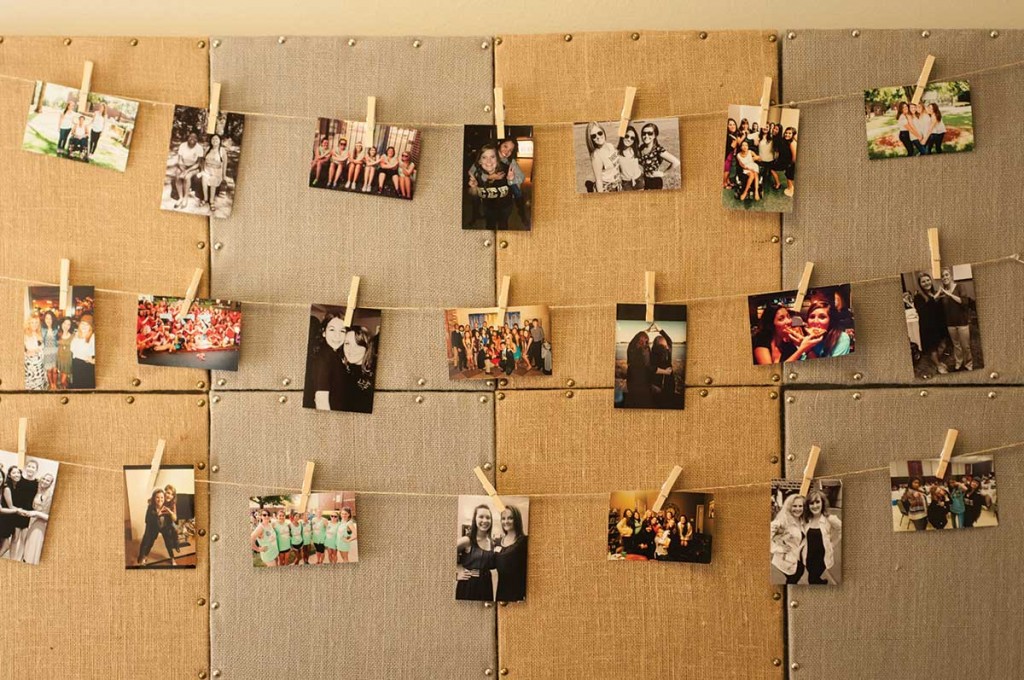 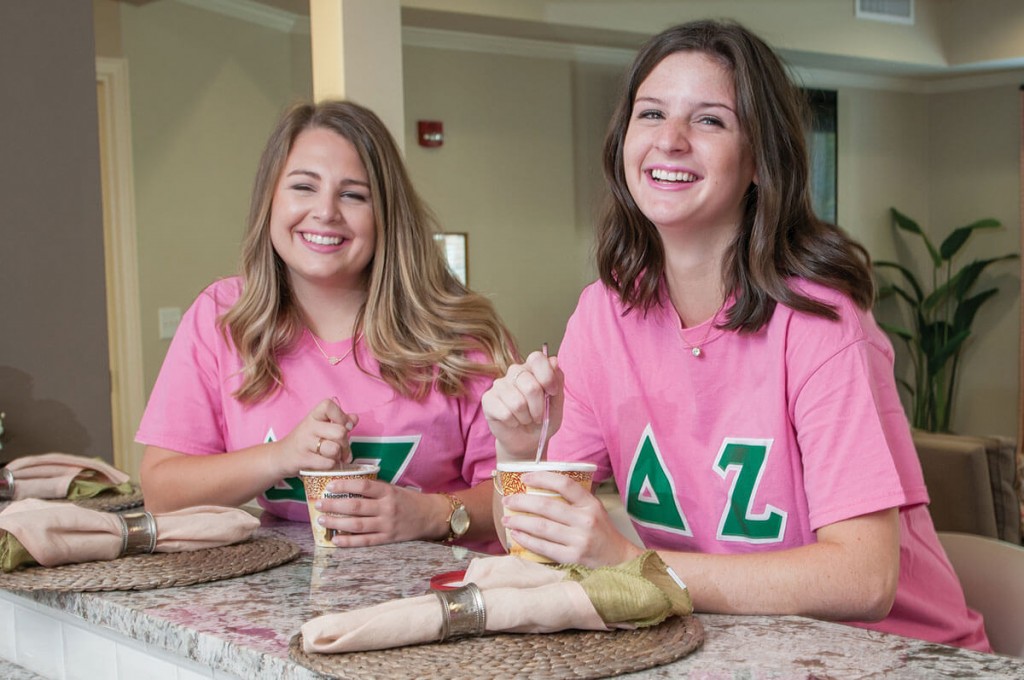 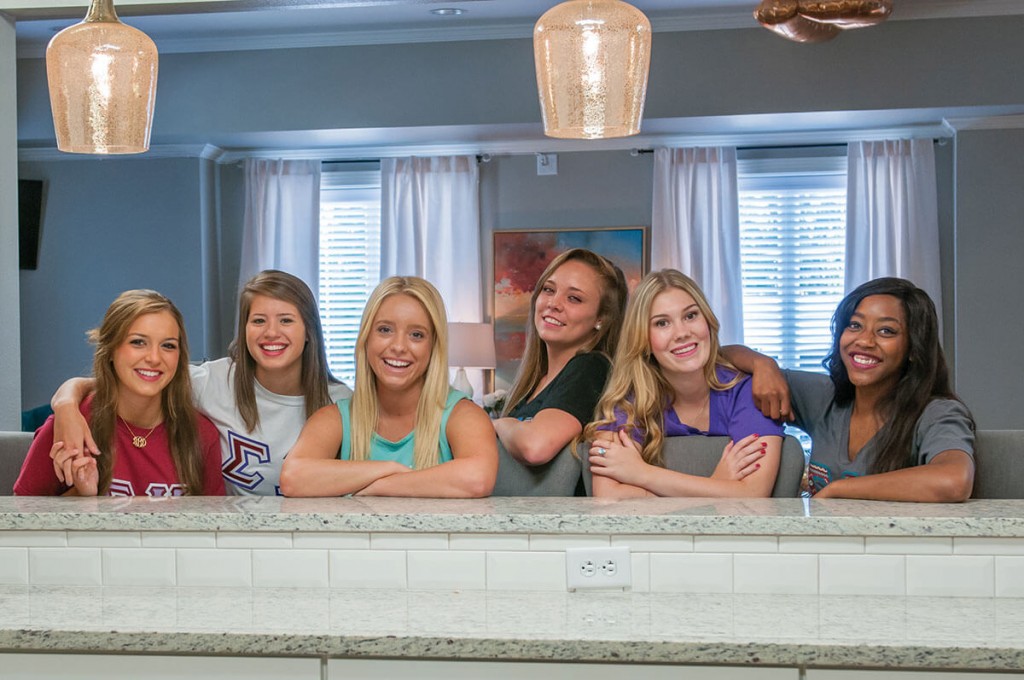 The decade-long journey to the construction of Greek Village began as many other university projects do, with a vision. Student leaders, UCA administration and staff met with a private contractor to discuss the possibility of constructing Greek housing in 2004.

Roberts said the Office of Housing and Residence Life was in a “crunch” as the University grew, and that problem presented an opportunity to consider Greek housing. At that time, sororities and fraternities had chapter rooms that were located in residence halls.

The University formed the Greek Housing Committee to begin researching lessons learned, best practices and how Greek housing at other universities operated.

Haley Crafton Fowler ’06, now director of annual giving in UCA’s Division of Advancement, was a student on the Greek Housing Committee when they visited Middle Tennessee State University. “It was really exciting to get to go and tour the other colleges and to think that UCA administration was actually talking about Greek housing on campus. So, from a student’s perspective, that was huge,” Fowler said. 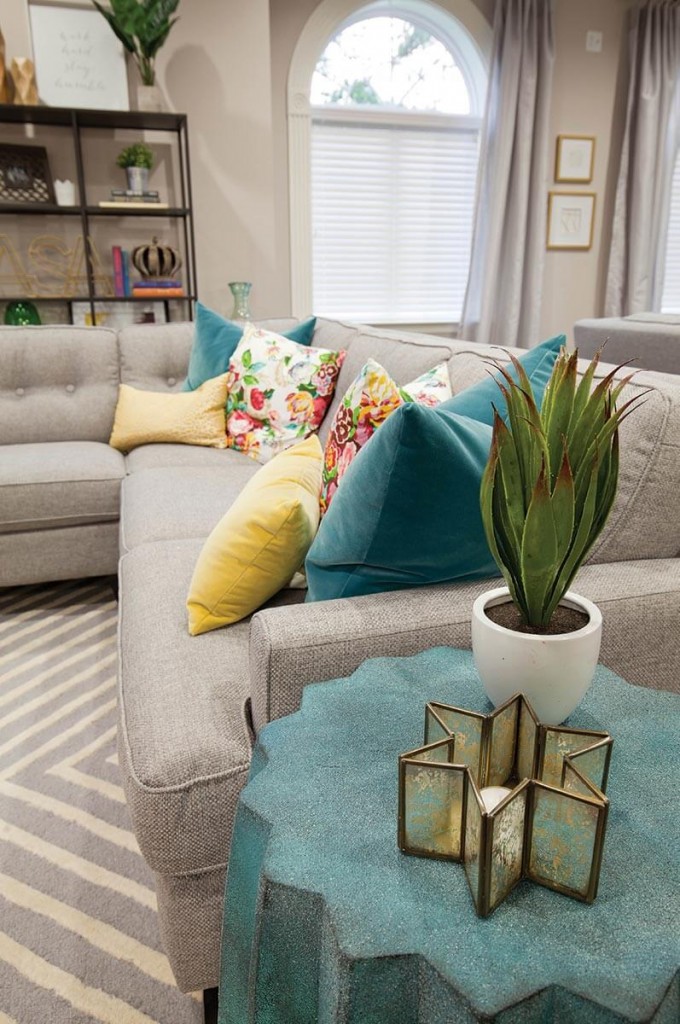 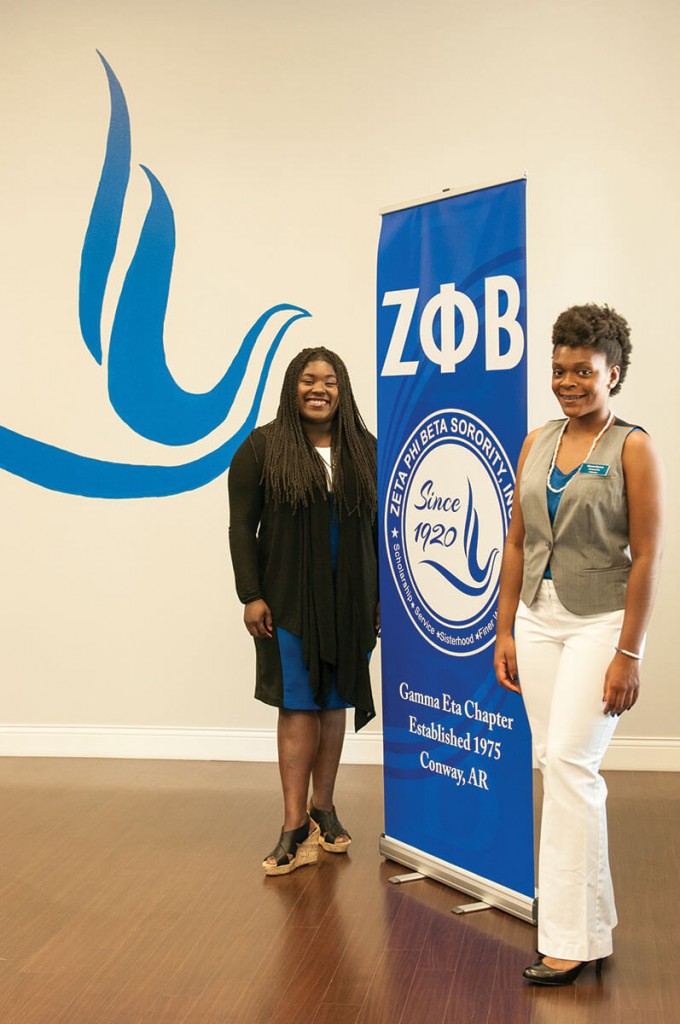 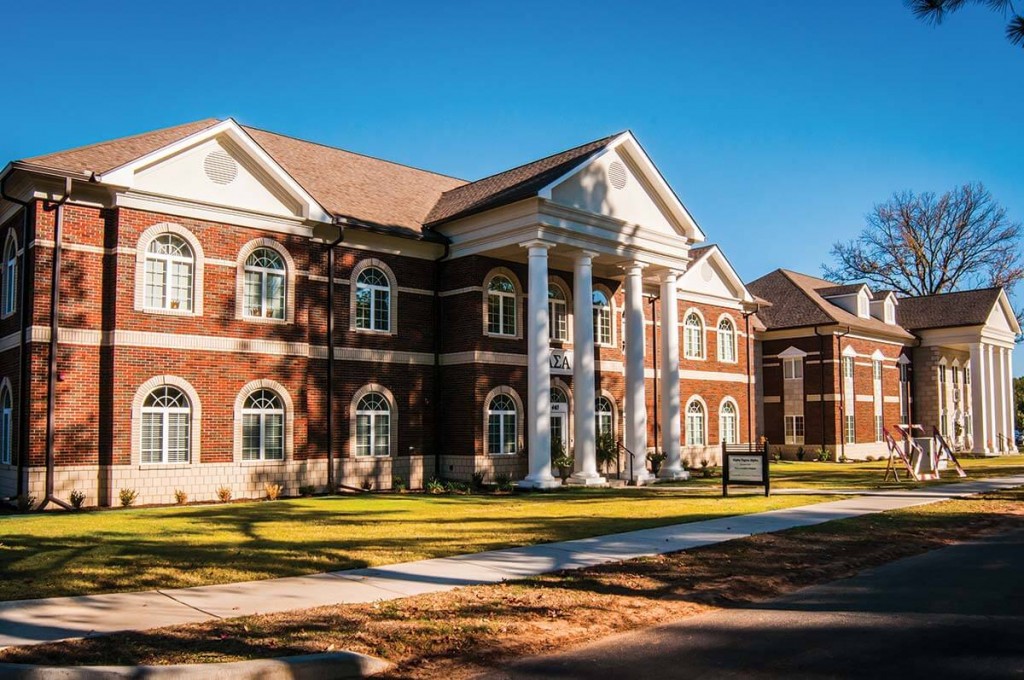 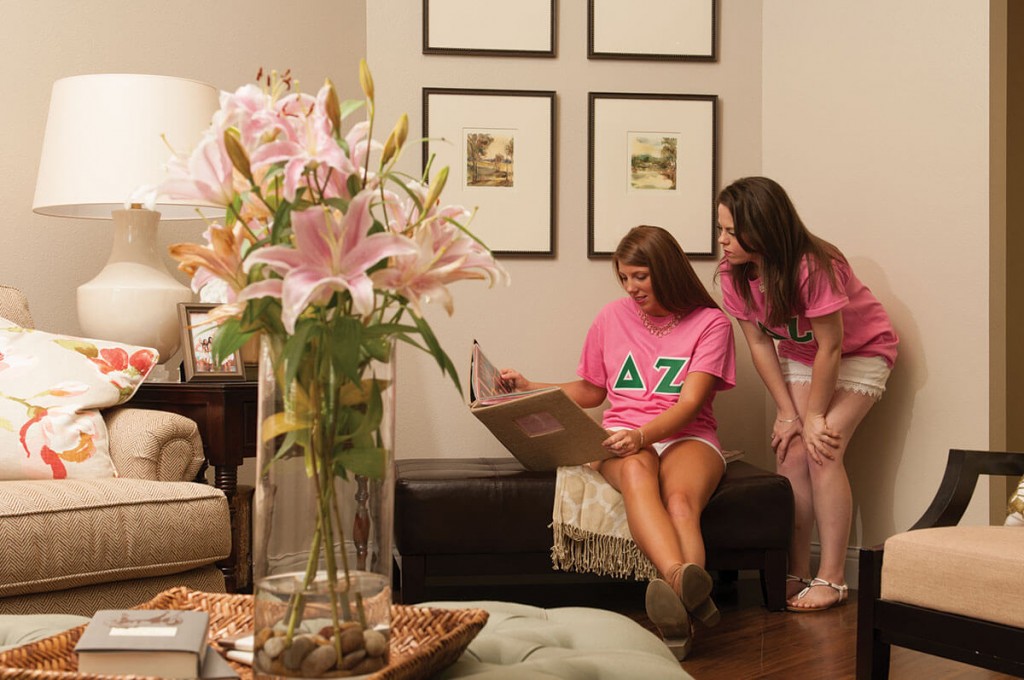 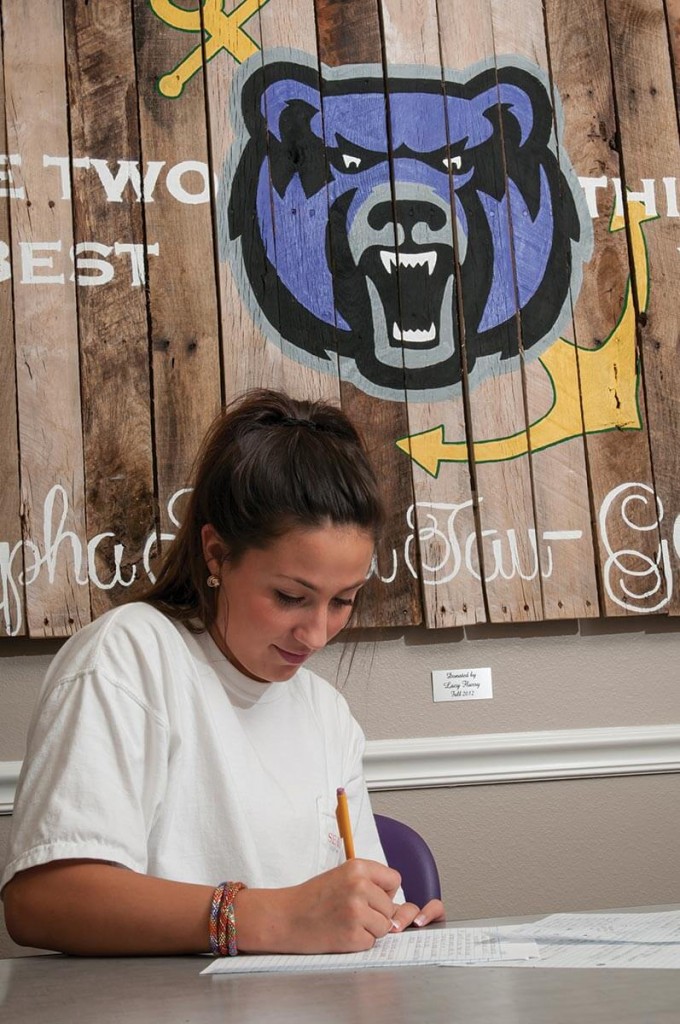 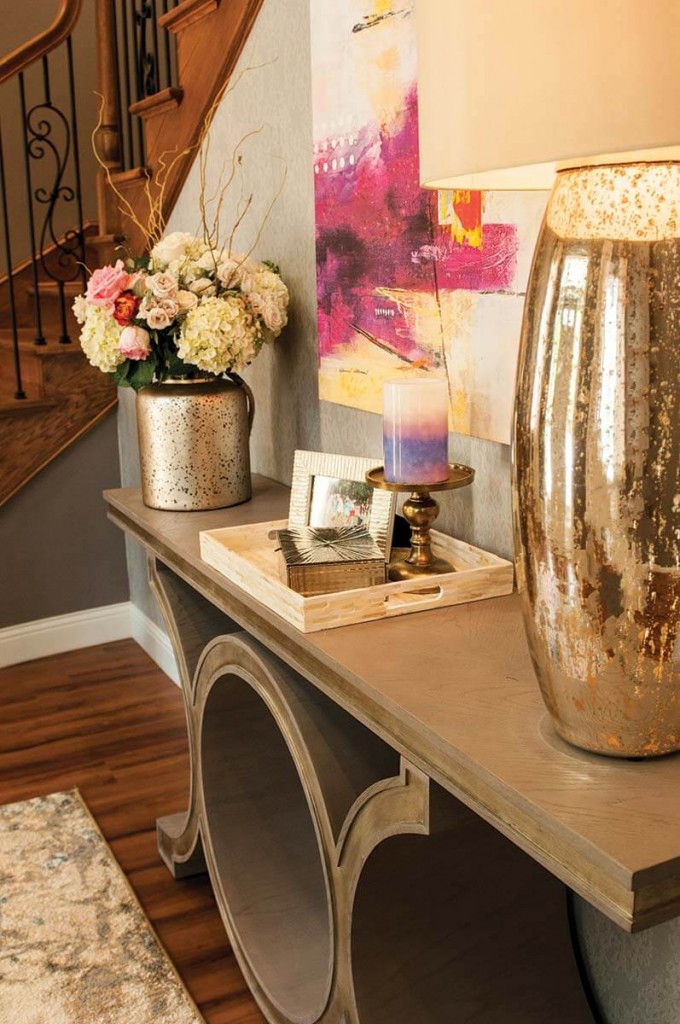 The University’s initial idea was to build a Greek housing complex on Western Avenue. Then in 2010, the intersection of Dave Ward Drive and Farris Road was thought to be the future home of Greek residents. Alumni and even campus Greeks were becoming frustrated, according to both Williams and Roberts.

Williams said, “The confidence wasn’t there because they were waiting to see something tangible. Something real that says, ‘This is happening,’ other than a plan and a visual of some rendering.”

Amidst the frustration and uncertainty of the economic and political climates, enrollment fluctuations and leadership changes, the Greek Housing Committee continued to push the conversation.

“President [Tom] Courtway was the first president to really look at the data and see the vision,” Williams said, adding that President Courtway recognized that Greek students, statistically, have higher retention and graduation rates than non-Greek students.

“When he got back from the last trip he made, he put his hand on my shoulder and he said, ‘Ronnie Williams, I’ve got religion. I believe.’ And I said, ‘Amen.'”

“That was the commitment we knew we had to get to move us forward, and the rest is history.”