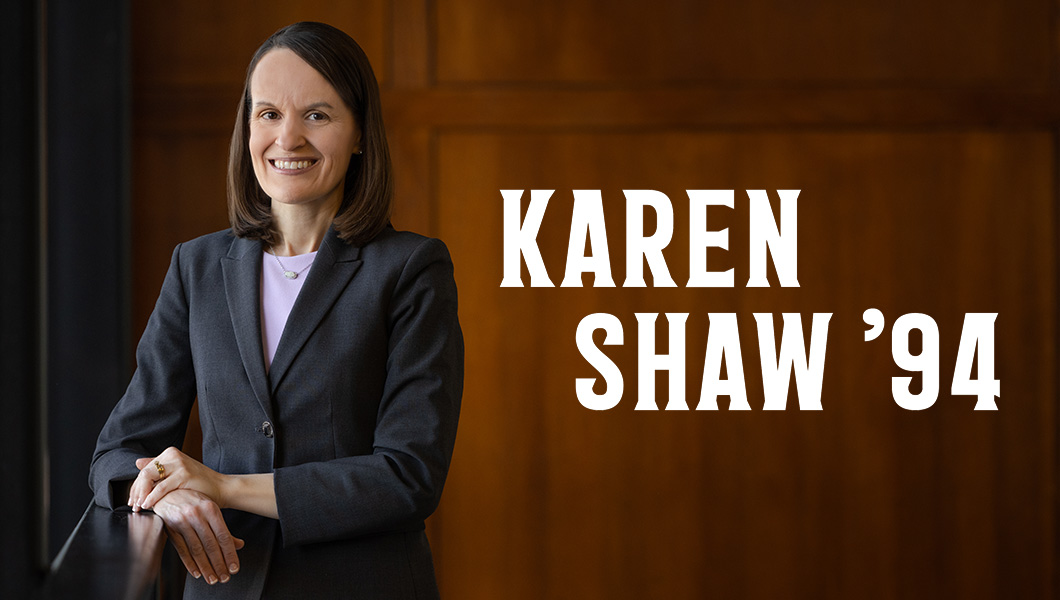 Starting her career, Karen Freeman Shaw ’94 simply wanted to work hard, serve others and find a job she would love. She thought she was meant to do her work behind the scenes; instead, she has gone on to significantly impact Arkansas as a successful leader, community activist and mentor to young business leaders.

When Shaw came to the University of Central Arkansas more than 30 years ago, she already knew she wanted to pursue accounting. She had worked part-time during high school for a small tax preparation business and was confident about what she wanted to do with her life.

The College of Business was housed in the Burdick Business Administration Building then, now called Burdick Hall. Shaw remembers sitting in hallways to study with friends there. Active in several student organizations on campus, she was a charter member of Beta Alpha Psi— an honor society for finance, accounting and other students —which continues to engage business students today. Looking back, she says she is proud of the education she received.

“The college was accredited when I was there. It is still accredited today. Few business schools achieve AACSB [Association to Advance Collegiate Schools of Business] accreditation, which indicates that UCA succeeds in offering one of the best business programs in the state and probably in the nation,” Shaw said. “Dean [Michael] Hargis and the College of Business have done an outstanding job adding in-demand programs of study and additional ways to give students leadership opportunities and hands-on experience.”

In spring 1994, Shaw earned her business administration degree with a focus on accounting from UCA and later achieved the status of Certified Public Accountant (CPA). But Shaw believes she learned more than accounting principles and practices during her four years in the college.

“At UCA, I learned the importance and value of collaboration, teamwork and how to work through difficulties. That provided me with a foundation to be successful in both business and in my personal life.”

Shaw began working at the Little Rock office of Ernst and Young, now one of the largest accounting firms in the world. She enjoyed her work as an accountant and expected a long career in the industry. However, the skills she gained during her eight years at the firm ultimately prepared her for a career change.

When her family moved to Batesville in 2003, she transitioned to the banking industry as vice president and loan review officer at Citizens Bank. Shaw’s hard work was rewarded after 10 years at the bank when she was promoted to executive vice president and chief financial officer (CFO) – the first female to be named to either role in the bank’s 60-year history. She has excelled in the role for nearly a decade.

“I’m proud to have been the first woman promoted to CFO and executive vice president at Citizens Bank and to have been part of the leadership team that grew this bank. When I came to the bank, it had $400 million in assets, and since then, we’ve grown to a $1.2-billion-dollar institution.”

Shaw is not only a successful CFO and working wife and mother, she is a community leader, serving at her church and on the boards of several Arkansas nonprofits over the years. She recently co-founded Professional Organization of Women Empowering Relationships (POWER) in Batesville.

“My passion is developing and empowering others to be leaders. We can do amazing things when we don’t care who gets the credit. The professors in the College of Business really instilled this foundation in me through team collaboration.”

Shaw also influences future business leaders by serving on the Board of Advisors for the college, which she sees as a tribute to those who have mentored her. As an alumna, Shaw knows where the college has been, and as an advisor, she helps to shape its future.

When asked about the keys to a successful career, Shaw answers without hesitation, advising students and young professionals to choose a job they love, work hard, live with integrity, find ways to give back and surround themselves with diverse people who can offer different perspectives.

Shaw was honored in 2021 by Arkansas Business when she was named CFO of the Year for the Arkansas bank industry. She says she was humbled to be recognized and is quick to point out that she shares the award with her talented accounting and finance team at Citizens Bank.

“I love what I do. I love who I work for. I love who I work with. It was an honor to be recognized,” Shaw said. “I’ve been blessed with so many people who invested in me, and giving back opened up a world of opportunities I never expected.”