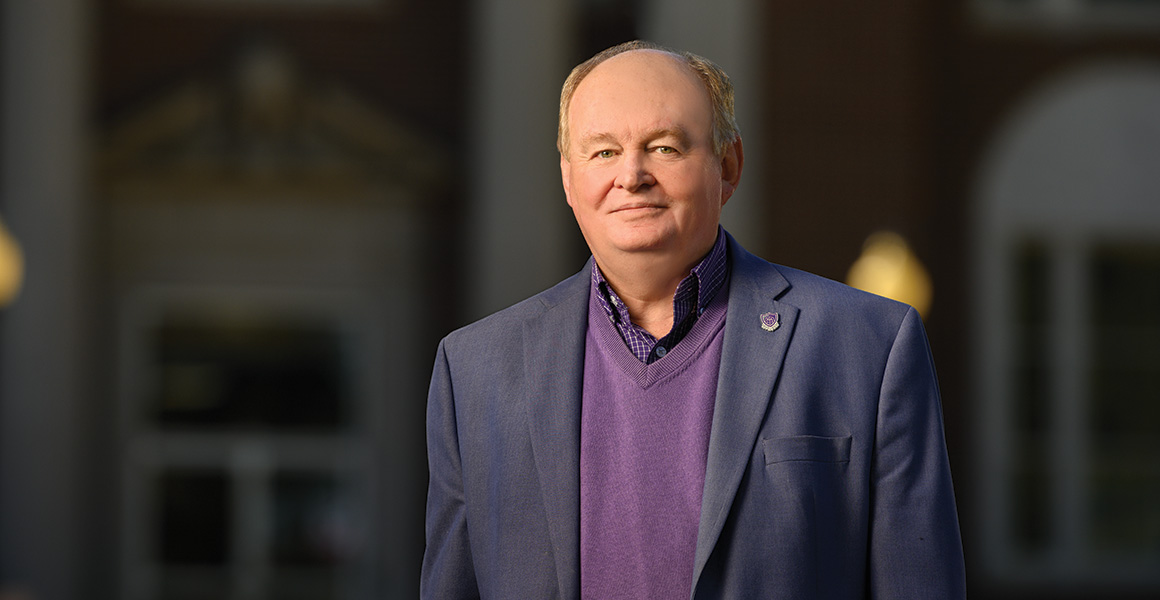 Jimmy Bryant ’95, ’96 takes frequent walks on the University of Central Arkansas campus. As he encounters university employees, he either greets them by first name or stops to chat and become acquainted with the employee.

He takes various routes, but he regularly visits the World War II Memorial and the UCA War Memorial, which are both dedicated to the UCA men and women who perished in wars since World War I. Bryant helped lead the efforts to bring these memorials to UCA’s campus.

“Most of the names on those monuments are young people who gave their life in the line of duty. They didn’t get to stay in the classroom and go to college. I think when students realize the contribution that their fellow students made, it really opens their eyes,” Bryant said. “History is more than just the events and a date. It’s how people’s lives are impacted by the things that are taking place.”

Bryant’s adoration for history began while growing up in England, Arkansas. He kept a box in his bedroom closet with news clippings of important events and happenings.

“I always liked history, and I liked collecting things, but I didn’t realize people got paid to collect stuff like that at a full-time job,” Bryant said.

As director of archives and university historian, Bryant is the campus expert on UCA’s history, as well as Arkansas history.

“I wrote the book, ‘The Centennial History of the University of Central Arkansas,’ and that was published in 2008, and I’ve written probably 200 articles about UCA, in some form or fashion,” Bryant said.

Judge Morris S. Arnold, a senior judge on the U.S. Court of Appeals for the 8th Circuit, deposited 35 years of his original court opinions, as well as family documents, beginning more than two decades ago.

Arnold said his family has practiced law in Arkansas since 1881. The family’s documents, including scrapbooks dating back to the 1890s, help trace the political and legal history of Arkansas. Over the past few decades, Arnold has periodically updated the collection.

“I got acquainted with Jimmy when I deposited some papers some 20-plus years ago,” Arnold said. “He knows every inch of the archives and the content of the archives. He’s an extraordinarily useful resource for people who want to do Arkansas history.”

Arnold said he and Bryant remain in contact discussing what items might be added to the collection in future deposits.

Bryant is called upon to speak about Arkansas history at local civic organizations, with state and national media, and on the UCA campus. He showcases historical photos, news clippings and other materials from the archives.

“Jimmy’s session to our new employees consistently receives the highest marks of all the speakers in the program,” Strickland said. “It is fascinating to hear the many stories and illustrations he has regarding UCA’s history.”

Bryant first came to UCA in the ’70s as a student. While here, he met his wife, Jann ’77, ’91, who retired from the UCA Community School of Music, now the Community Music Institute. He completed a bachelor’s and master’s in history in 1995 and 1996, respectively. He began working as director of archives and university historian in 1998.

Additional collections of materials may not be possible for the foreseeable future. Bryant said the UCA Archives is close to capacity, but he plans to continue researching and writing about Arkansas and UCA history. In fact, some of his recent research revealed that the campus hosted a teacher-training center for African American students in 1932, prior to integration. He hopes to continue conducting this kind of research and inspiring others to do the same.

“The only thing I truly want to do is to renew an interest in Arkansas and UCA history,” Bryant said.