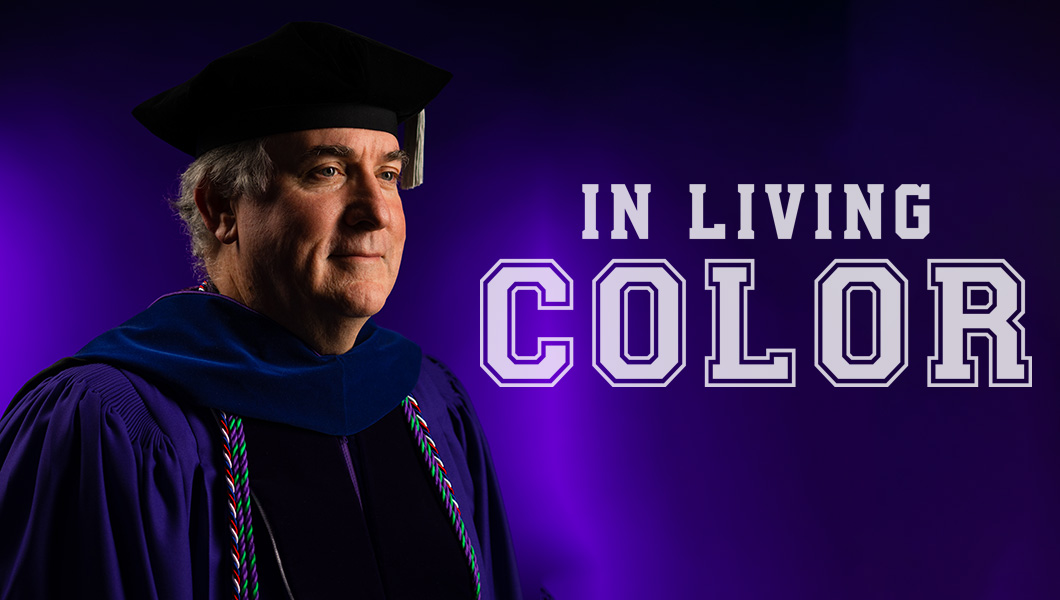 Michael Turley ’16, ’21 stood out at the University of Central Arkansas’ Farris Center during the fall 2021 commencement ceremony, celebrating his newly-earned doctorate of philosophy in interdisciplinary leadership studies. Among a sea of graduates in the traditional black regalia, Turley wore purple to honor his alma mater.

His request to wear colorful regalia was tribute to his parents. His father, Martin Turley, adorned the vibrant red and gold of McGill University, and his mother, Micheline Turley, wore the crimson of the University of Southern California at their own graduation ceremonies.

“I wanted to graduate the way my parents did with colorful regalia,” said Turley. “I knew how much that meant to them.”

In many ways, the life and career of Turley is a love letter to his parents. He modeled life based on their successes—being lifelong learners and pursuing a dream of educating.

Turley says that his passion for education began when he visited his father’s classroom as a child. His father worked in a public school system for 38 years in southern California as a special education teacher.

“Even then, I always wanted to work with students from watching him,” he said. “Teaching mattered to him the most. He did not aspire to be a principal or administrator. He always aspired to be a master teacher.”

In 1987, Turley joined the United States Air Force after he earned his bachelor’s degree. He trained as a pilot and a liaison officer, and primarily served abroad, stationed in 14 time zones by his estimate. He speaks fluent French, a skill he picked up from his French-Canadian mother. He even served as a French and Italian interpreter and taught language classes to help U.S. personnel speak conversationally with their European colleagues.

Turley later shifted from a rewarding Air Force career to one in the classroom like his father. He gained a mathematics teaching position at a community college and later in the Pine Bluff School District. “A UCA recruiter visited me about the Master of Arts in Teaching program,” he said. “I was always interested in the science of learning and knew that this degree could help me better teach students who struggled in high school math.”

Some 20 years after attending college, he found the strength to go back to school, by the example of his mother, who earned a pharmacy doctoral degree—one of six women in her class.

He hoped to inspire his students about the value of college education by openly discussing his positive experiences as a student.

After completing his master’s degree, his father encouraged him to continue. “He asked me, ‘So what are you going to do next?’ That made me want to reach a higher standard in being an educator,” Turley said.

That constant drive to learn more reminded him of his youth when his father would leave the house in the morning and announce that he was going to school—as if he was a student as well.

“He meant that in a literal context,” said Turley. “He often said that he learned more from his students than he could ever possibly teach them. There’s always something more to learn about how to educate.”

His words resonated with Turley, prompting him to apply to UCA’s doctoral degree in interdisciplinary leadership studies, a comprehensive program in the College of Education that enhances leadership qualities in all aspects of a K-12 education system. Martin Turley passed away just before his son was admitted into the program. Michael Turley knows his father would have been proud.

The program made Turley consider how teachers can be stakeholders in a student’s education, serving as mentors and leaders in and out of a classroom.

Today, he has taught for more than 30 years, and now works at the Arkansas River Education Service Cooperative at their Flex Academy, where he teaches math and science students who benefit from learning in a nontraditional setting.

Meanwhile, his pursuit of more education continues as he considers postgraduate work.
“Wherever I attend my next commencement, I’ll wear my UCA robes,” he said, in the spirit of his parents and in gratitude to the university.