The best men’s basketball player in University of Central Arkansas history has a new challenger. In fact, strictly viewed by his collegiate accomplishments, the new guy might be even better than the old one.

Scottie Pippen ’01, who played at UCA from 1983-87, won six NBA championships with the Chicago Bulls and two Olympic gold medals playing for the United States. Pippen, a member of the UCA Sports Hall of Fame and named one of the NBA’s 50 greatest players, is generally recognized as UCA’s top male basketball player in history and arguably UCA’s most famous alumnus.

But in the four years since Jordan Howard ’17 arrived on campus from Chandler, Arizona — thanks to UCA Head Men’s Basketball Coach Russ Pennell — he has put himself squarely in that conversation.

The numbers are a bit staggering. Howard, a 5-foot-11 guard, set the UCA career three-point record midway through his junior season and finished his career with 386. The old mark, set in 2009, was 206. In January, Howard broke the 26-year-old career scoring record at UCA and ended his stellar career with 2,524 career points, breaking that record by 367 points, in five fewer games. He came two points short of breaking the single-game scoring record when he scored 43 points against Stephen F. Austin on Jan. 24 at the Farris Center. 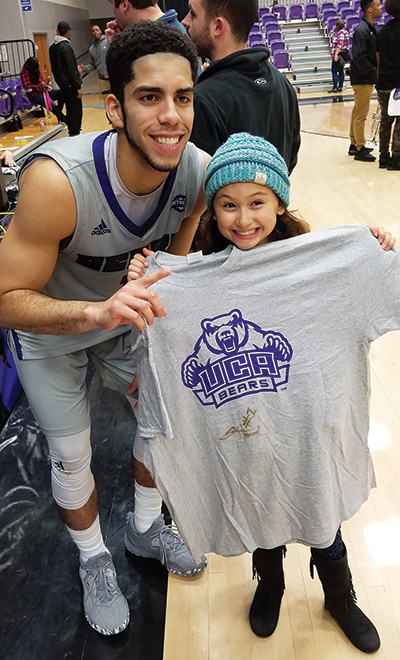 “I have to thank all my teammates and coaches. Coach Russ for recruiting me and believing in my abilities,” he said. “It’s a huge accomplishment, and it’s definitely an honor to be with all those great names. It was good to get that behind me, and it’s definitely something I cherish and appreciate. But my main goal is to just lead this team and get as many wins as possible, reach our potential and get to the NCAA Tournament.”

Howard has certainly reached his potential — on the court and off. He graduated from UCA in December 2017 with a degree in digital filmmaking and a minor in marketing. His GPA was 3.71. Howard was also UCA’s first Academic All-American in the Division I era last year, both as a junior and senior.

“He is the absolute epitome of a student-athlete,” said Pennell, who brought in Howard as his first recruit when he took over the program in 2014-15. “He understands the hard work and dedication it takes to be successful on the court, and the determination and work ethic it takes to accomplish things in the classroom as well. He is what all collegiate student-athletes should be.”

Howard first caught the nation’s attention this season when he scored 35 points against No. 20 UCLA back in November 2017. The Bears took the Pac-12 Bruins to overtime before losing 106-101 but still received major play nationally for the near upset.

“After that UCLA game, what we did as a team and what Jordan did individually, [we were] all over SportsCenter with Scott Van Pelt that night, and the next day as well,” Pennell said. “You can’t buy that kind of exposure. People have taken notice of UCA because of some of the things this young man has done in his career. He has helped put us on the national map.

“And he will continue to represent UCA in a first-class manner [in] whatever he does for the rest of his life, whether it’s basketball or something else,” Pennell said. “That’s the kind of young man he is.”