Hannah Blaylock knew she wanted to be in the music business since she was a little girl.

“I remember going to a Dixie Chicks concert when I was nine years old, and I wore a pink snake cowgirl hat,” Blaylock said. “I wanted to sing on stage my whole life. I’ve always known that.”

Blaylock was active in choir in high school and became the vocalist and founding member of the highly successful country music trio, Eden’s Edge. The band was comprised of three members, all Arkansas natives, who won a contest sponsored by Country Music Television. Being a part of the band afforded Blaylock a plethora of opportunities to fulfill her lifelong dream.

“We were very lucky to have the opportunity that we got,” Blaylock said. “We moved to Nashville to see if we could try to make a living making music, and from there it is just surreal.”

After moving to Nashville in 2007, Eden’s Edge was signed by Big Machine record label and joined Brad Paisley on tour. That tour led to a tour with Reba McEntire, then Lady Antebellum and finally, Rascal Flatts.

“On every single one of those tours there was an encore where we would all come up at the end,” said Blaylock. “They always supported and featured all the acts that were on tour. It was never just about them. Country music is pretty awesome in that way. They really support everybody that they can.”

Blaylock left Eden’s Edge in 2013 to begin working on her solo career as a singer and songwriter. She considers Nashville her home now and loves that the music community is very interwoven so she still recognizes some familiar faces.

“Kris Allen and I used to sing in Phi Alpha together, as well as at New Life Church,” said Blaylock. “He, Adam Hambrick and I became friends at UCA, so it’s cool that now we are all here cheering each other on in Nashville.”

Blaylock attended UCA in 2004 and was a member of Alpha Sigma Alpha before she transferred to Nashville’s Belmont University in 2007.

“It takes time to create a foundation, find yourself and discover your sound,” Blaylock said. “I literally started back at square one with my solo project, but 350 songs later, in January, I ended up cutting a record with my heroes, Emily and Marty from the Dixie Chicks.”

Going solo and taking a leap of faith isn’t easy to do, but Blaylock is thrilled to be working with the band that sparked her love of country music and performing.

“The music that they created is the reason why I wanted to sing country music,” said Blaylock. “It’s such an affirmation for me that they have helped me make my next step. This is a huge gift.”

The first song on Blaylock’s EP “My Roots Run Deep,” “Burned The Forest” is inspired by her childhood spent growing up on the farm, watching the brush fires burn to create healthier soil and grass beneath the ashes. “The song is about when a life or world is burned to the ground and how out of the ashes comes an even richer and fuller experience,” Blaylock said. 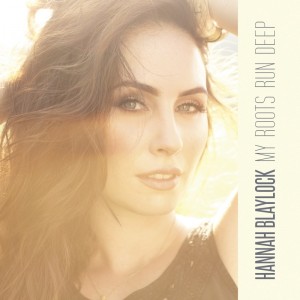 Listen to “My Roots Run Deep” at http://www.hannahblaylock.com/music/