Music has always been a big part of my family. In fact, all aspects of the arts seemed to be present in my childhood. My father was a professional violinist, my mother was a former ballerina who ran a side business as a calligrapher and my two sisters and I participated in every theater and dance performance we could find. This is why I was intrigued when I heard about a group of University of Central Arkansas alums now living in Nashville, Tennessee who are making a name for themselves in the music industry. Many of them have degrees unrelated to the arts, but it is the love of their craft that keeps bringing them back to their passion.

Several members of the magazine team traveled to Nashville to track down these UCA alums so we could share their stories. What a cool experience to see two former UCA students, who are now professional musicians, pick up their guitars and start singing together just as they had done years ago on the UCA campus. It was almost as if no time had passed. 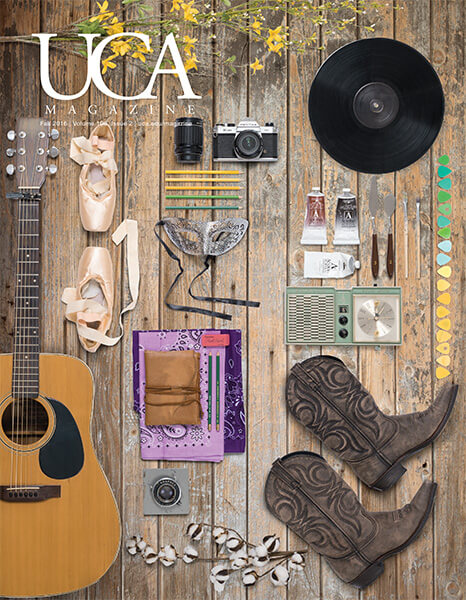 Because this edition of the UCA Magazine features numerous musicians, we are including a CD of some of their songs so you can not only read their stories, but hear their music as well. We even decided to take it a step further and bring some of these musicians back to UCA for a concert. Let me tell you, trying to coordinate the schedules of five professional musicians is about as easy as putting socks on a rooster! But we managed to pull it off, and the “Back at Home” concert at UCA’s Reynolds Performance Hall on October 28, 2016 will be a night of musical performance like no other.

When my dad was diagnosed with cancer and the prognosis was not very optimistic, he shared with us that one of the reasons he felt he had a full life was because he had gotten to spend it doing one of the things he was most passionate about…playing his violin. Cancer took a lot of things from him, including his life 11 years ago, but it couldn’t touch his love of music.

I dedicate this issue of the UCA magazine to Dad (he would have loved this!) and to all artists out there who feel called to pursue their passion.

If you sing, dance, create visual art, play an instrument, or just enjoy listening, looking, or learning about the arts, you know how powerful the experience can be. Creativity’s driving force is to inspire the body and soothe the soul. So, sit back, relax and enjoy the profiles, the CD and we hope to see you at the concert in October!