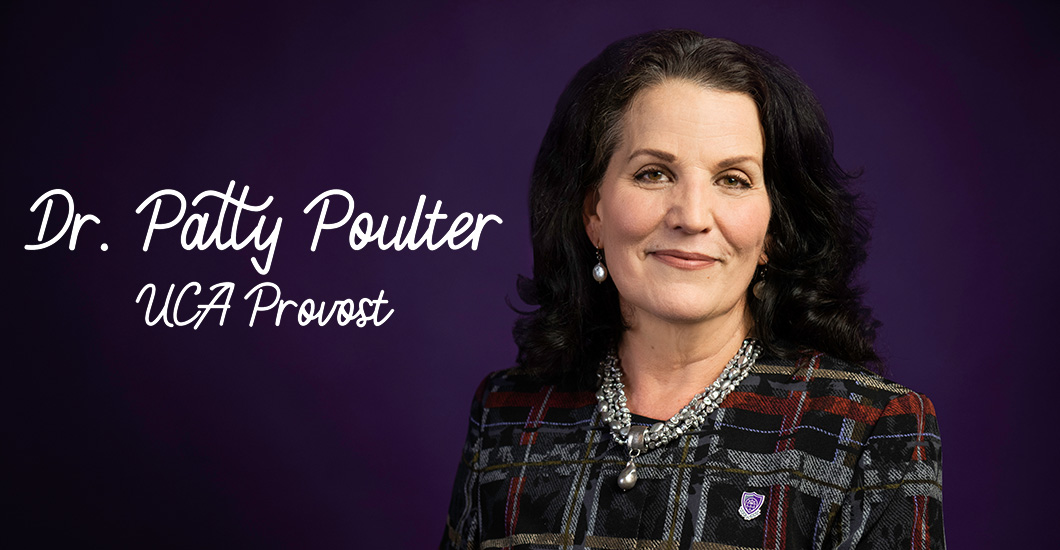 When Patricia “Patty” Poulter began her role as provost and executive vice president at the University of Central Arkansas in July 2018, she immediately felt at home in Arkansas.

“My family has been here for seven generations,” she said. “I have experienced a connection to this place that I could never have anticipated, and that is probably due to my family.”

Poulter’s family tree is rooted in Walnut Ridge, where her father was raised. During her childhood, Poulter and her family would travel from their Illinois home to Arkansas for holidays and vacations.

During the first months of her tenure at UCA, Poulter represented UCA at the presidential investiture at Williams Baptist College in Walnut Ridge. While there, she took time to make a special stop.

“I visited my grandparents’ grave. I put my UCA pin on my grandma’s grave,” Poulter said.

For her, the pin symbolized how education can change the trajectory of a person’s life. As a first-generation college graduate, Poulter recognized UCA’s reputation for serving first-generation students and helping them succeed. This is one of the factors that drew her to UCA.

“The mission, the size of the university, the focus on student success, on helping people become more of their family’s destiny, on allowing the innovative work being done by faculty, and the diversity in the colleges and the degrees offered, it resonated with me,” she said.

As provost, Poulter serves as the chief academic officer for the campus. She oversees UCA’s six academic colleges, the Graduate School, the Norbert O. Schedler Honors College and other academic departments. She plans to support and expand the university’s efforts in areas such as research, partnerships with two-year institutions and student success strategies. At the Laurels & Stripes event hosted by UCA in March, Poulter established the Lloyd and Vivian Gaines Scholarship with a gift of $25,000 in honor of her family.

“We are a best practice in student success,” Poulter said. “In general, I am excited about focusing our efforts on helping students to persist and to succeed. We are coordinating those in ways that are game changers for our students.”

She received a bachelor’s in music education and master’s in conducting from Eastern Illinois University. She earned her doctorate in music from the University of Illinois at Urbana-Champaign.

Her style of leadership is based, in part, on problem solving, listening, assessing, planning, building trust and collaborating, Poulter said, as well as empowering those around her to be successful.

“Frankly, innovation happens when people can communicate and collaborate and find ways to share resources,” she said.

Poulter is the first female provost for the university, a fact she said she did not notice immediately because another woman already worked at the executive staff level, Diane Newton, vice president of the Division of Finance and Administration.

She has also recognized a “strong and positive, organic, groundswell here at UCA in women’s leadership,” to which Poulter said she is dedicated to helping foster.