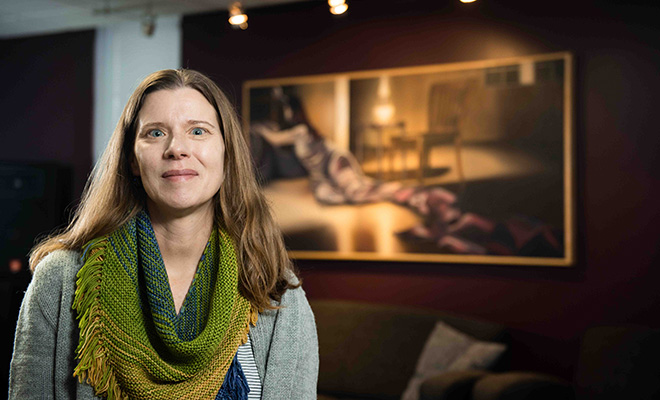 “I’ve always been a person who was interested in everything,” said Donna Bowman from behind her desk in McAlister Hall.

A professor of interdisciplinary studies in the Norbert O. Schedler Honors College and scholar of religion — she’s got her bachelor’s, master’s and Ph.D. in the field — Bowman has picked up a curiosity in various subjects over the years.

For one, she’s a critic of television and film, a gig that began when she was an undergraduate staff member of Wake Forest University’s campus newspaper. Today, she pens critiques for digital magazine Think Christian and has also analyzed AMC hit shows “Better Call Saul” and “Breaking Bad” for entertainment site The A.V. Club.

“They’ve been kind of enough to give me a lot of television, film and book criticism work over the years,” said Bowman, who joined the University of Central Arkansas in 1999 as the first faculty member hired solely for the Honors College.

She also picked up knitting and crocheting in 2007, which has impacted her research. In 2015, she released her book “Prayer Shawl Ministries and Women’s Theological Imagination,” which analyzes the impact prayer-shawl making has on the women who create them.

Bowman found her current research path after crafting a few of the pink cat-eared pussy hats worn during the 2017 Women’s March in Washington, D.C. While she knew stories would be told about the marchers, she found it important to also tell the stories of the crafters just like she did for prayer shawl creators.

“I realized very shortly before that march happened that I was in a good position—being a knitter and having written this book about talking to people about the meaning they find in their craftwork—to talk to the people who made the pussy hats, about the meaning they found and why they did it, and what they thought of the outcome and their experiences with that,” said Bowman, who encourages students to craft, color, draw or be “materially productive” in some way during class discussions.

While Bowman has enjoyed instructing at UCA, she’s also enjoyed what she’s learned along the way.

“I would be a perpetual student if I could,” she said.