Employees are seen as family by D.R. Horton, and that includes their children, too.

As founder and board chairman of D.R. Horton Inc., the Arlington, Texas-based company that has been the largest homebuilder in America since 2002, Horton takes pride in “taking care of our family.” One way he does that is by providing Camp Horton, an annual summer camp for children related to his employees.

In 2000, as Horton traveled to every division of his company, he often met the children of his employees and wondered what the kids did in the summer. After learning most didn’t have a summer vacation at all, he figured the least he could do was provide a free experience away from home.

“I told people that as hard as our people work and the way they look out for the company, it was the company’s responsibility to look out for them and their kids,” said Horton, who was named a University of Central Arkansas Distinguished Alumnus in 2004.

For nearly two decades, Camp Horton has taken place on his ranch land in Fort Stockton, Texas, providing activities like horseback riding, canoeing, four-wheeling, goat wrestling and indoor games for children ages 9 through 13 who are nominated by the company’s divisions.

Each summer, Camp Horton covers the cost for 360 kids–or 60 per week–to be flown in from their home state. Campers travel from Alabama, the Carolinas, Florida, Hawaii and other states across the country, and they can be children, nieces, grandchildren, younger siblings and foster children of company employees. Through attending the camp, Horton said he wants the children to learn the company cares about them, hone their manners and experience West Texas ranch life.

“One of the stipulations is they cannot have another summer camp because we want to make sure all the kids, all of our children, have a summer camp experience,” Horton said.

Horton’s emphasis on family stems from his upbringing in small town Marshall, Arkansas, population now 1,355, where everyone knew one another, he said. When he attended UCA, those experiences continued.

“When I went to UCA, I think it was 5 to 6,000 students, and you got to know a lot of those students,” he said. “You always felt like the people you saw all the time were just like family. I think the people, the teachers, the people that ran the dorms, they were all good solid family,” he said.

Carla Freitas, Horton’s executive assistant, said the camp provides children an opportunity to interact with their peers and learn a new way of life. Many, she said, have never seen a horse before.

“They meet new friends; they learn different ways; they learn manners,” Freitas said. “There’s not a lot of ‘Yes, sirs’ and ‘No, sirs’ in this world. It’s the little things that often get forgotten, and we remind them. It’s ranch life. They take away all their electronics, and they don’t seem to have a problem with it anymore.”

The camp also strengthens the confidence of its attendees: Children participate in recreational activities that many of them have never experienced, and they practice life skills such as respect, communication and teamwork.

Beau Edwards, a Dallas resident who attended Camp Horton for the third time this summer, said the camp provides fun in a safe environment.

“My confidence has gone up by riding horses because you’re all saddled down, and you are safe when you’re riding it, but you’re also having fun at the same time,” he said.

“You just never think of yourself as a role model until you come to a place like this, and you’re expected to be that role model, and you file into that role, and it’s a really humbling experience, just being that for these kids,” she said.

Camper Brian Guana from San Antonio, Texas, had never been to a camp until he attended Camp Horton this year. He had fun riding an all-terrain vehicle and made friends early on.

“I feel like I want to stay here for another two weeks,” he said.

Zeke McStay, a camper from Ghana, experienced his first visit to Camp Horton this past summer. He enjoyed the speed of the ATVs and had never ridden a horse until the camp.

“I love Camp Horton because you get to do fun things, and it’s a really nice place,” Zeke said. 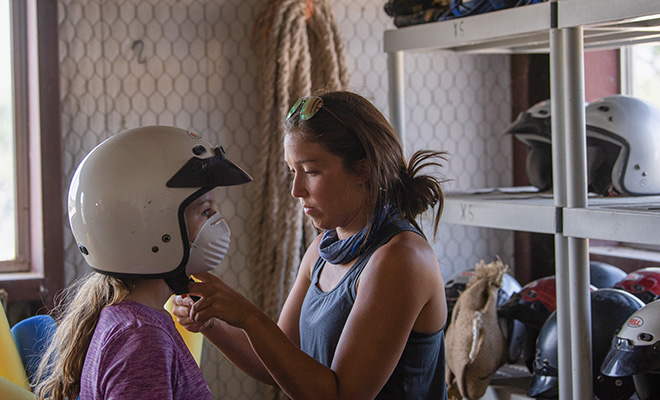 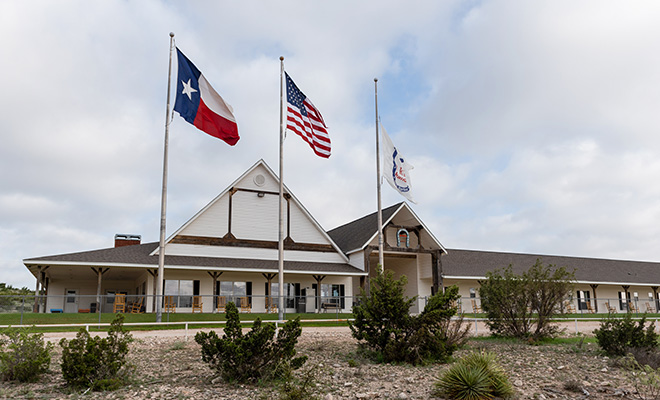 Reagan Decker, who traveled from Pensacola, Florida, to attend the camp, said the environment of the camp was unlike what she has experienced.

“It’s gorgeous,” she said. “I’ve never seen cactus in person, so that was fun. It’s pretty, and the air is so good, because it’s so humid where I’m from. You can breathe; it’s nice and cool.”

Horton has witnessed the camp shape children’s lives. When visiting the camp in its early years, Horton sat down for a meal with the children and noticed one camper was eating with her hands.

“I grew up in a remote part of Arkansas, and I knew a lot of people that could have possibly eaten with their fingers, but at that point in time … that surprised me to see that in the 2000s,” Horton said. “We sat down with her, and we taught her how to eat with silverware, and I’ll never forget that.”

When Camp Horton concludes each year, Horton typically receives cards in the mail from children or their guardians thanking him for the experience. Over the years, Horton has also seen former campers become D.R. Horton Inc. employees.

This year, D.R. Horton Inc. set a new all-time annual record of about 53,000 closings. As the company continues to succeed, Camp Horton grows, too. It’s only a matter of time before the camp hosts 600 kids a year, Horton said, offering more children the opportunity to have a summer vacation they would not otherwise experience.

“I don’t know how you could not be proud of the kids,” Horton said.