Prior to being known as the Bears, University of Central Arkansas students and teams were known as many things–tutors, teachers and even pedagogues. In 1920, inspired by a student’s class ring design that featured a bear, what was then Arkansas State Normal School adopted the bear as the school mascot. It’s a fitting representative: Arkansas was known as the bear state due to its population of black bears.

Plus, bears have some pretty strong attributes.

“Black bears are very intelligent, super athletic and tenacious,” said Jimmy Bryant ’95, ’96, director of archives and university historian. “Along with some of the black bears’ attributes, UCA Bears have additional strengths that have made them leaders in education, health sciences, art and music, communication, business, liberal arts and the sciences.”

UCA Magazine caught up with Bryant to explore the various bear monuments on campus.

It wasn’t long after UCA adopted its bear mascot in 1920 that a live bear joined the picture. Dubbed Big Boy, UCA’s live mascot was a black bear owned by Louis Sharpe Dunaway and his family in the early 1920s.

University archives show the 1922 football team posing with Big Boy, noting that Dunaway’s son, football captain Allen Dunaway, said he was “probably elected captain because he was the only one who would hold the bear mascot.”

After Big Boy’s death, his head was preserved and encased. It can be viewed today in the Hall of Fame room in Estes Stadium. 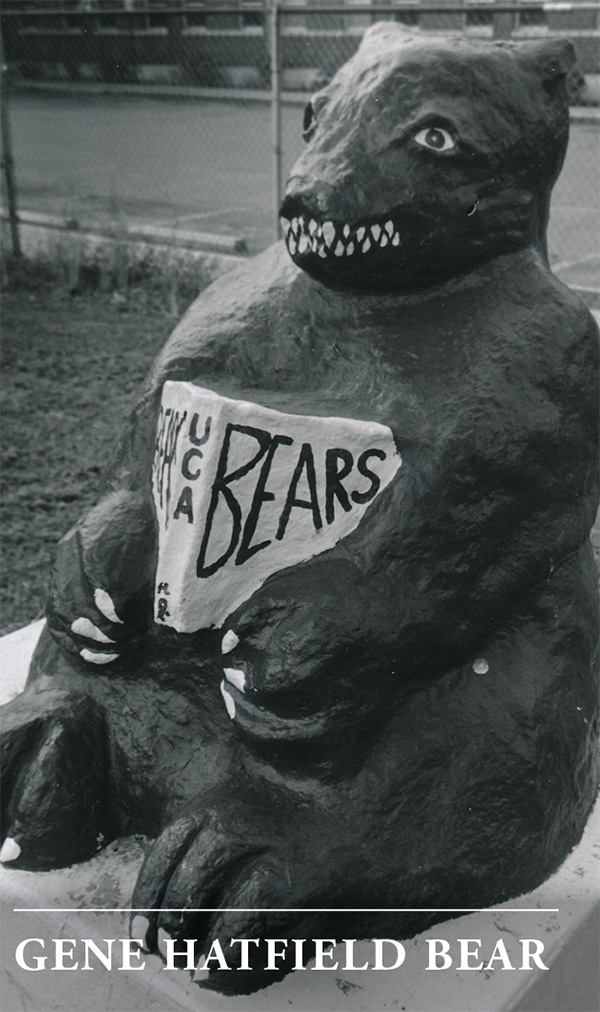 In keeping with university tradition, the Class of 1947 planned to leave a special gift to the school: a sculpted marble bear. However, when the class’s artist fell ill and it was too costly to hire another, the effort was abandoned. That’s when Gene Hatfield ’47 stepped in.

As a professor of art, and someone who had assisted in the class’s fundraising efforts for the bear, Hatfield led a project for his class in 1949 to create a concrete bear to fulfill the wishes of the 1947 class. This bear sits between Estes Stadium and Bear Hall today. Over the decades, the bear became misshapen as it saw countless coats of orange, green, yellow and purple paint due to students from rival schools Arkansas Tech University and Hendrix College marking it with their colors. Over the years, this bear has been informally referred to as “Buddha Bear.” 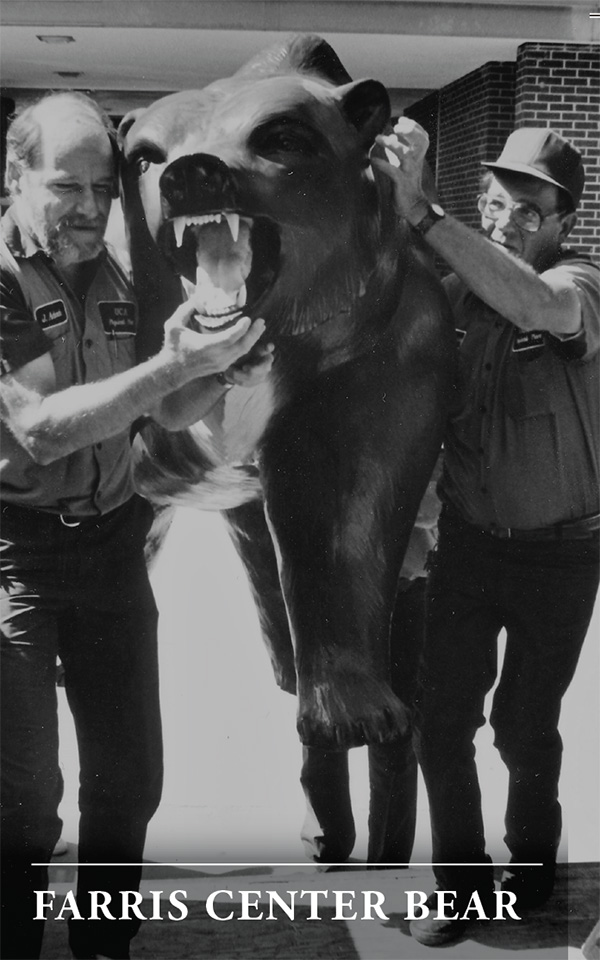 In 1967, the UCA Student Senate purchased a purple fiberglass bear that was shipped by freight from California. According to a March 1967 issue of The Echo, the bear, which stands on all fours and bears its teeth, was $500.

For a time, it was displayed in the Administration Building and was also displayed in the Student Center for decades, Bryant said. Today, the 61/2-foot-long bear can be viewed in the lobby of the Farris Center.

Though acquired out of school spirit, this bear is modeled after a grizzly bear, not a black bear. This could be because over the years, sports writers began referring to university teams as the Grizzlies instead of the Bears, leading to misconceptions about which bear the mascot is modeled after, Bryant said. 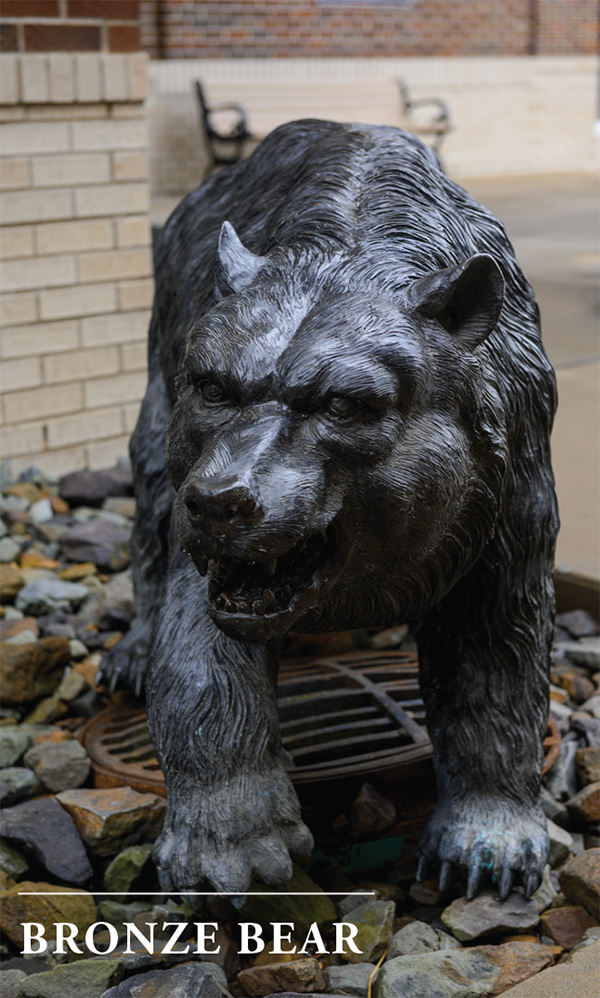 In 2006, the UCA Foundation accepted a bronze bear in honor of the UCA Centennial. Bearing a ferocious pose, the bear can be found outside of Bear Hall, not far from the creation led by Hatfield. David Grimes ’91, ’96 donated this bear in honor of his parents, who are also UCA alumni, and his brother Kenny Grimes ’96. The bear was created at a foundry in Thailand.

“The small bronze bear located at the south entrance of Bear Hall is yet another reminder that we are all Bears!” Bryant said. 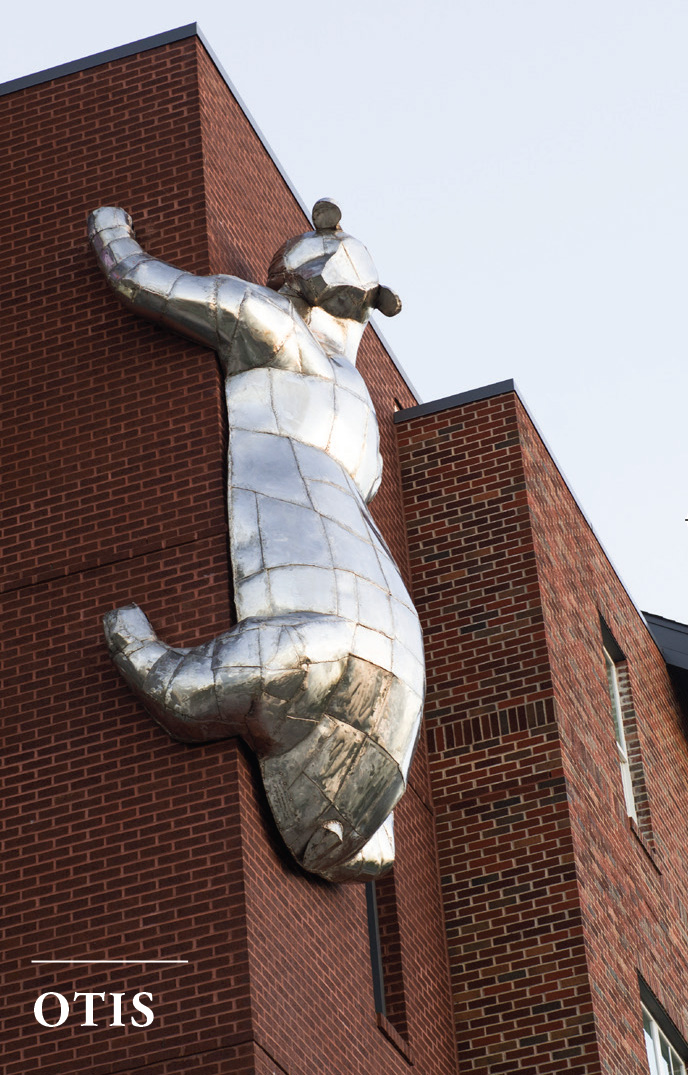 Sculpted by Department of Art Chair Bryan Massey, Otis is a stainless-steel bear replica that hangs on the side of Donaghey Hall. The sculpture was unveiled in 2016 as part of the grand opening for Donaghey Hall. Otis, a 2,000-pound, 15-foot-long creation, greets individuals as they approach the mixed-use building located at Bruce Street and Donaghey Avenue.

“When you see a bear that size on the side of a building, you can easily figure out, ‘Hey, these are the Bears here,'” Bryant said. “I think it gives us a little bit of personality and enthusiasm for our mascot.” 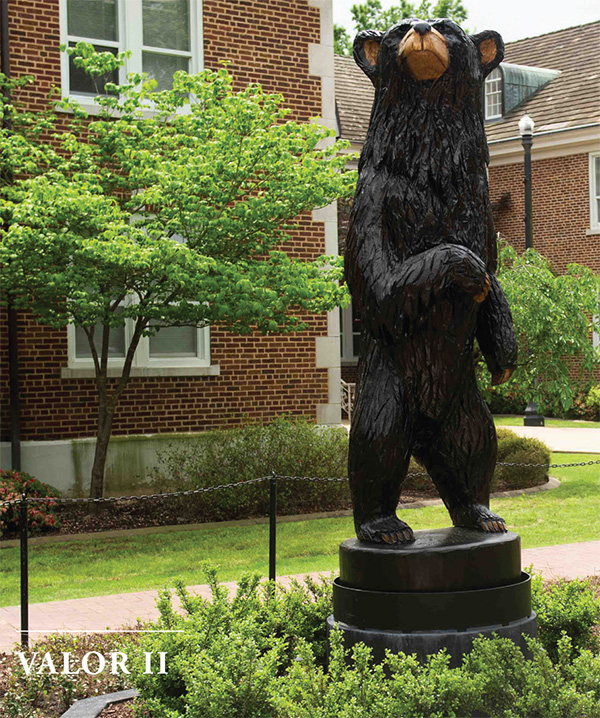 The original life-sized bear carving known as Valor was created from one of UCA’s World War II red oak Memorial Trees in front of Wingo Hall in 2013. Eventually, it had to be removed due to decay. In spring 2019, however, chainsaw artist Gary Keenan returned to campus to sculpt Valor II, which stands in front of Wingo Hall as a welcome to campus. Numerous visitors, including couples who marry on campus, stop to take a picture with the celebrated bear, Bryant said.

“It is kind of like a destination point when people come to our campus to have their picture made with that bear,” he said. “It’s been extremely popular, and it’s been a public relations home run. But it’s meaningful, too, because Valor bear represents those alumni who were killed in World War II.”