Steve Griffith ’82, ’88 has not earned a paycheck from a “real” job since 2001. That was the year he closed the doors to his successful psychology practice to become a full-time artist.

“Before I officially closed the psychology practice, we had a family sit-down to talk about us ‘chasing a dream’ and everyone said, ‘Yes. Let’s all make a family effort to go for that,’ ” he said.

His wife, Vivian ’81, ’83 and their four children became his greatest supporters. The children, who are now all UCA alumni, helped with laborious tasks. Vivian maintained her career with the Vilonia School District and served as Steve’s chief marketer, helping to catapult his artistry.

High-end galleries immediately began showcasing and selling his art. UCA alumni friends rallied around him by commissioning and purchasing his art. Further accelerating his career, a Memphis company began using a Griffith painting as product labeling for its wines.

As Steve’s work continued to ascend, Vivian joined him and left her career to also become a full-time artist.

Their lives together started on their first date, which just so happened to be at the Arkansas Arts Center in Little Rock. That was about 20 years ago, but both have been artists at heart for nearly all their lives.

Steve still remembers a teacher’s comment from his third grade report card, “Steve is a good student, but he spends too much time drawing and coloring.”

Hanging in a spare bedroom at their Conway home is one of Vivian’s earliest works, a self-portrait she created as a teenager. Drawn on a shopping bag, the portrait is complete with a “greasy thumb print” that was likely left by her father as he admired the piece.

Today, Steve is primarily a plein air artist, which means he generally works “in the open air” painting landscapes and natural scenery. Vivian is a mixed-media artist, using a number of art media to create abstracts and figurative works of humans and animals.

The couple uses a mobile studio to travel and work at locations across the nation: California, Wyoming, Utah, Alabama, Texas and Florida, to name a few. They spend about half their time traveling.

The rest of their time is spent at their Conway residence that serves as both a studio and gallery.

Neighbors sometimes awaken to a selection of rock, blues or classical tunes blasting from the paint-splattered CD player during early morning hours. The art space is outfitted with at least a half dozen easels, canvasses of multiple sizes and art in varying states of completion.

In addition to galleries, the Griffiths sell their artwork by posting completed pieces on social media networks. Interior designers, many of whom are UCA alumni, file through their home to browse and purchase new paintings for a client’s home. 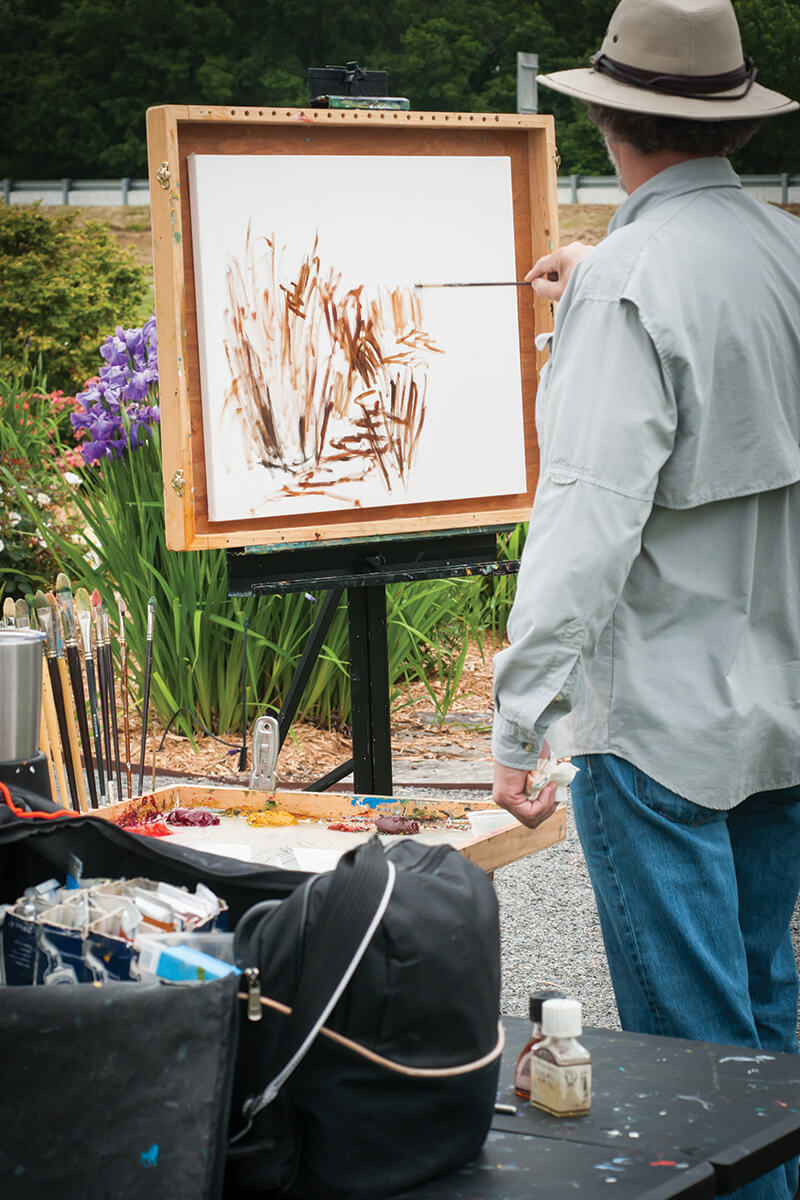 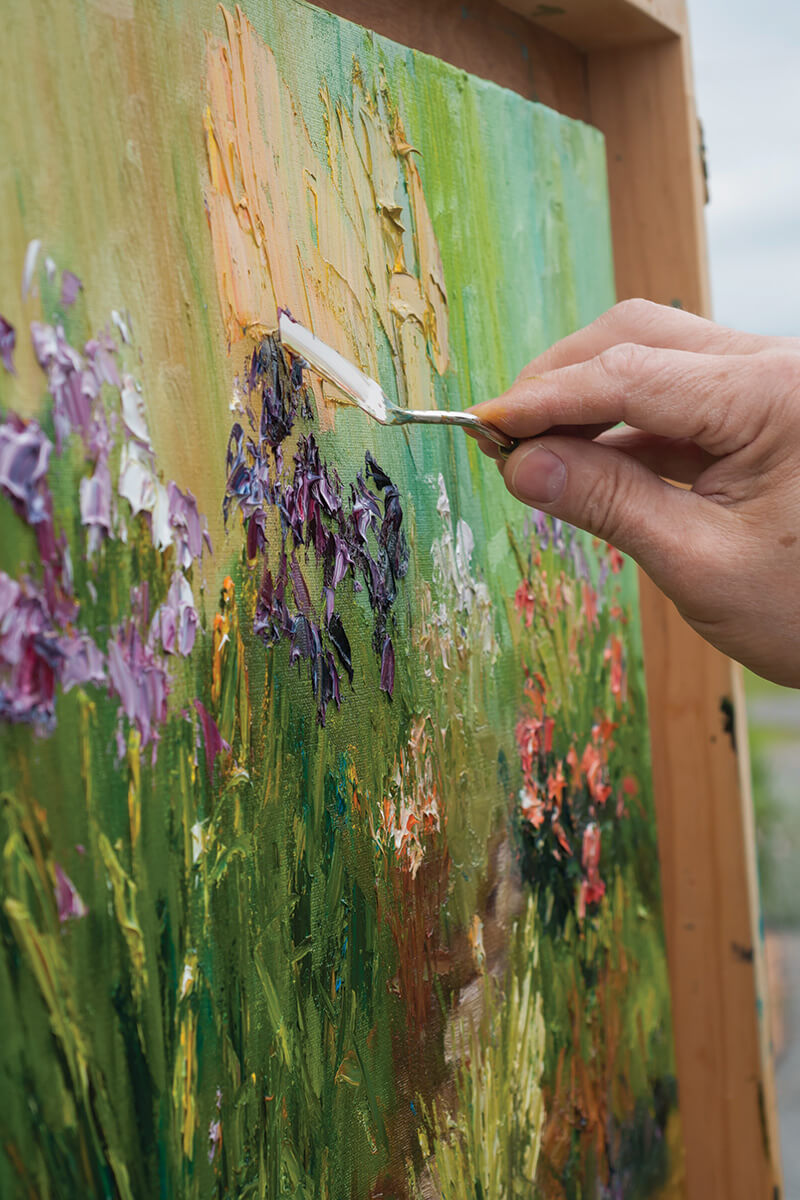 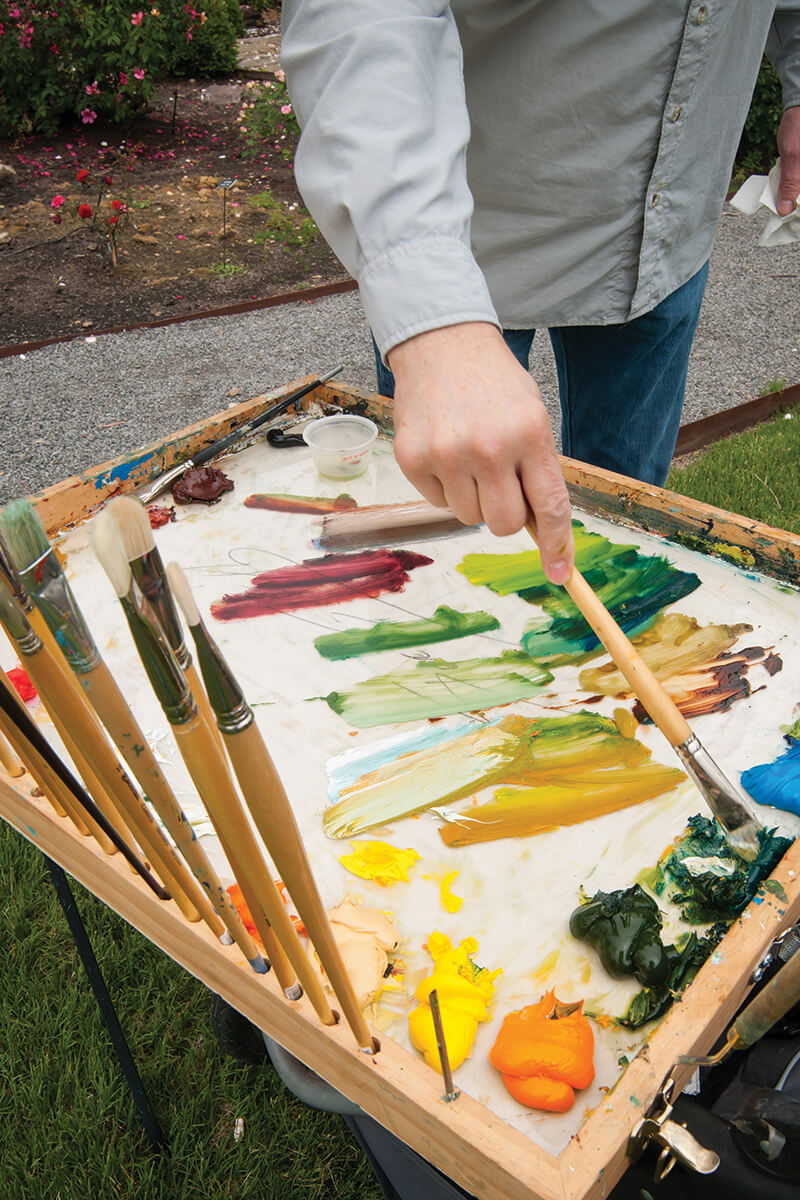 The Griffiths are grateful for their success and attribute much of it to their UCA education and its alumni network. This success has allowed the Griffiths to begin another endeavor, philanthropy.

“I don’t know that a month goes by that we’re not involved in at least one charitable cause,” said Vivian.

The Griffiths have supported local nonprofits such as H.A.V.E.N. (Help for Abuse Victims in Emergency Need) House and the Boys & Girls Club of Faulkner County, as well as many other charitable organizations.

“If we deem it a worthwhile cause, and most of them are, we donate artwork,” Steve said. “We’ve done fundraisers for almost every kind of nonprofit that you can imagine.”

The pair donates art, supplies, talent and time by preparing a piece that organizations can auction at special events. The Griffiths either prepare a piece and then present it to the organization, or they create a new work during a live show.

“We make nothing off it. We donate the materials, everything,” Steve said. “Some of them will raise 20 or 30 thousand dollars off the artwork that we give them.”

The funds help the organizations sustain their programming, but the Griffiths believe it also increases notoriety.

“We set up one of these paintings at a function, and you get a lot of attention doing that,” Steve said. “As much as any finances that the art has generated, it’s the awareness too.”

While the Griffiths both had early careers in the “helping fields” of education and psychology, they believe their philanthropic artwork has had a greater impact on society.

“I think our fiber is charity,” Steve said. “Humanity is definitely us. That’s Viv and Steve.”