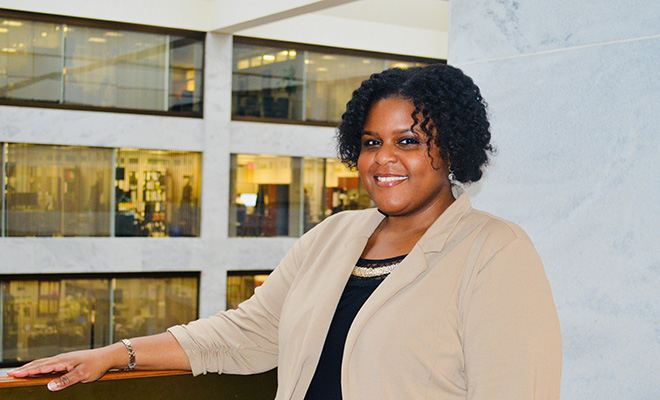 Ariel Marshall ’08 wanted to become a pharmacist when she came to the University of Central Arkansas. Her plans changed after participating in research with university professors.

“When you think of fuel cells and these new technologies that will replace fossil fuels, these sort of compounds can, maybe, play a role in the larger discussion,” she said.

Marshall began considering the public benefits of the research and the technical knowledge that would be involved in policymaking. Being a part of these larger discussions was the impetus for her career change.
“Those are really questions that a policymaker is in charge of answering,” she said.

Rather than pursue her plan of becoming a pharmacist after graduation, Marshall enrolled in graduate school to further her research interests. She was accepted to the Georgia Institute of Technology where she earned a doctorate in chemistry in 2014. While there, she also earned a certificate in public policy in 2013.

From Georgia Tech, she received an Arthur H. Guenther Congressional Fellowship in Washington, D.C., which led to her current position as senior domestic policy adviser in the office of U.S. Sen. Jeanne Shaheen. In this role, she oversees energy, environment and science issues.

She believes her prior research at UCA helps her in understanding not only scientific policy but also the need for funding.